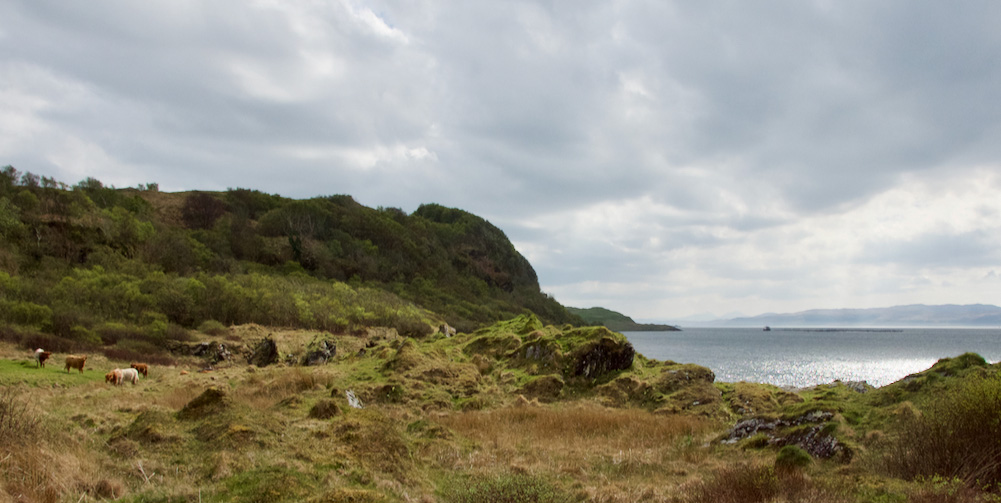 How hard is it to walk through a woodland? Pretty hard, I’ve just discovered. The other day we headed south down the Craignish peninsula, enjoying the greening of the woodlands, the exuberant burst into vivid emerald leaf: sycamores and beeches first, with oak and ash still held firmly in bud. Willow warblers were singing, and the banks were speckled with the bright yellow stars of primroses. 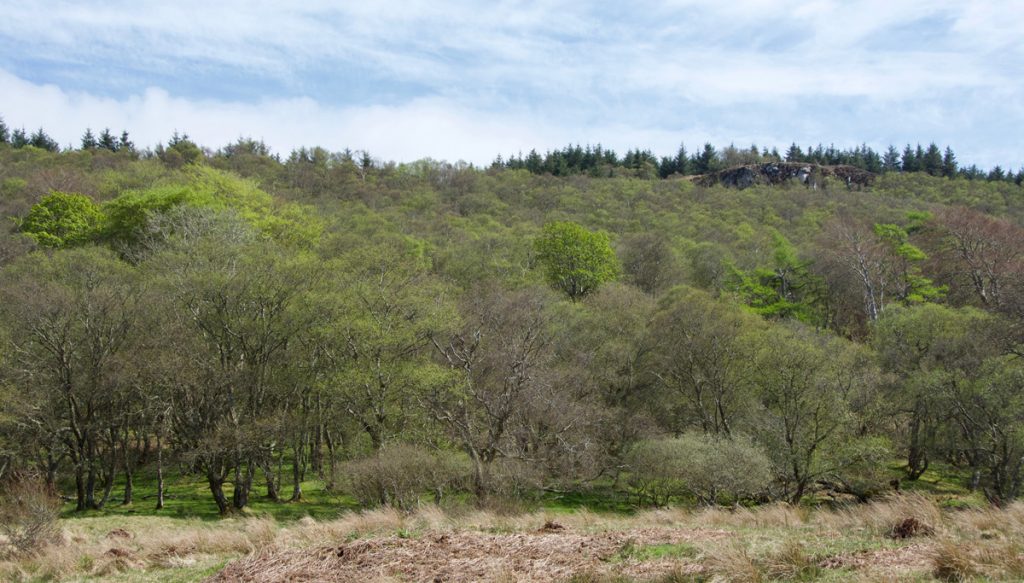 We stopped to admire a grove of hazel trees growing on a south-facing slope, their branches bending so low that they almost kissed the ground. At their feet, violets, primroses and bluebells grew in profusion. These must surely be old trees. Hazels don’t usually make thick trunks, but instead they throw up a cluster of slender saplings, expanding outwards as the tree matures. But these hazels have thick, mossy trunks, which seems to suggest an unusual age. 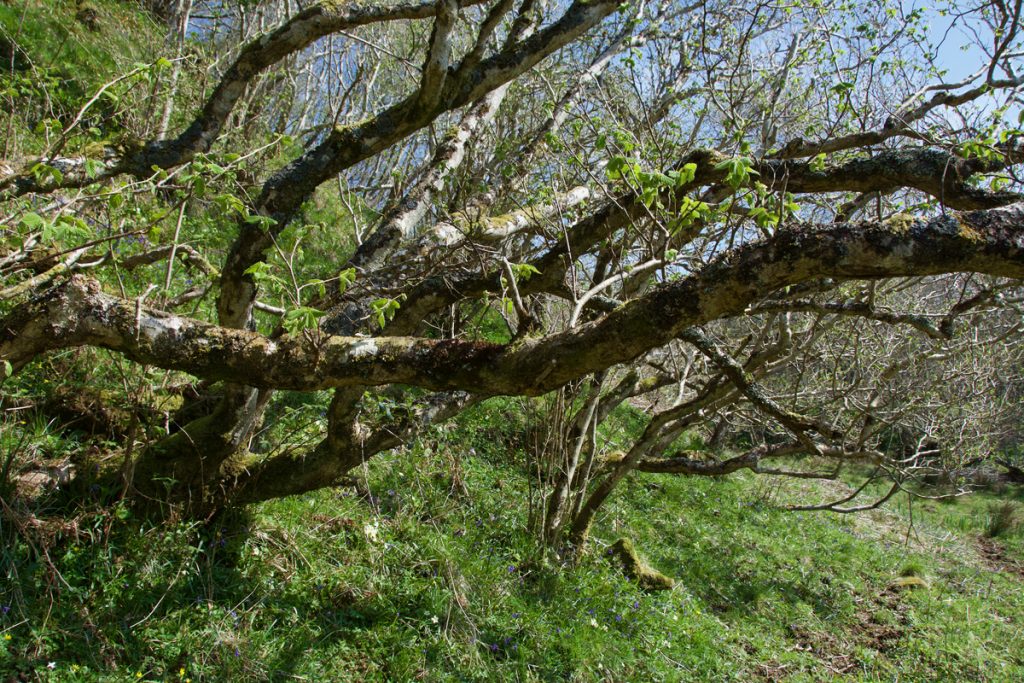 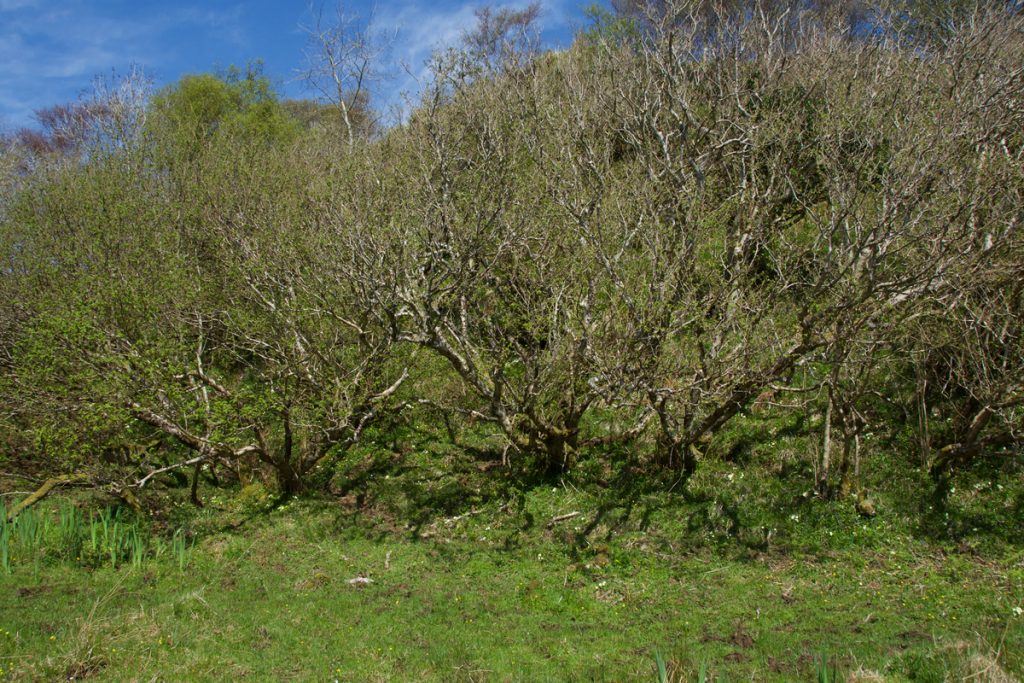 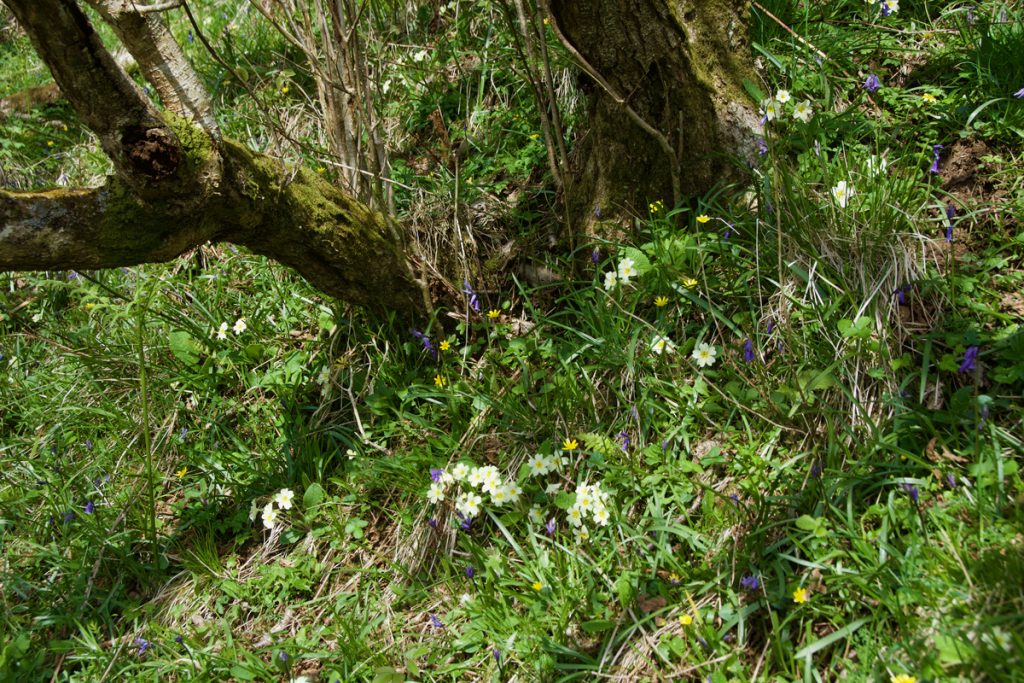 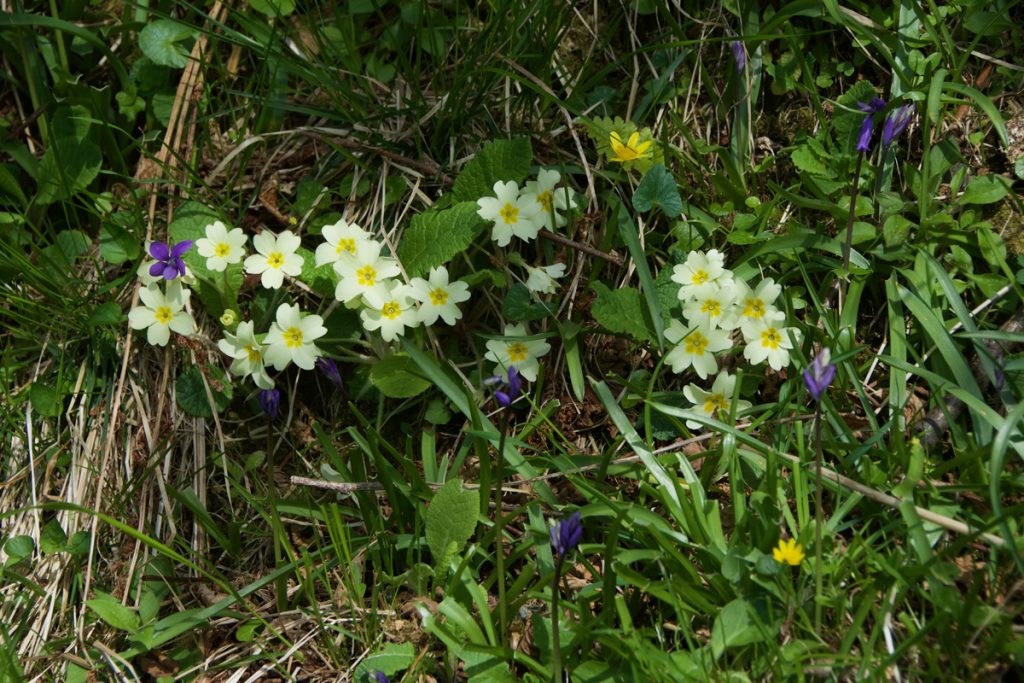 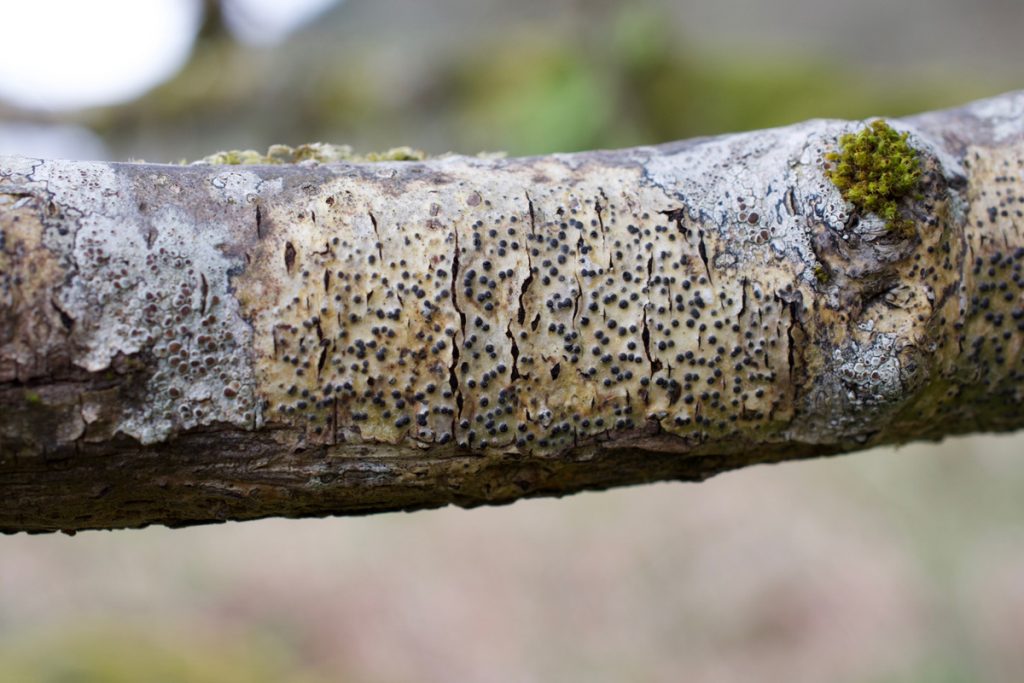 This lichen is called Blackberries and Custard, and I guess you can see why!  Its Latin name is Pyrenula hibernica, and it is often found in hazel woods.

Picking our way through a marshy field that was liberally pock-marked with cow pats and hoof holes, we arrived at a natural wall of rock that creates a kind of low barrier along the shore. The geology here is magnificent: layers of sediment unbelievably folded and contorted, with sandwich fillings of quartz and pyrite. More primroses peeped out from a cavity under a fallen slab of rock, which I examined carefully on suspicion that it might be some kind of archaeological remnant – a cist, perhaps? Probably not, but I’ve learned that every stone around here has a story attached to it. In any case, nature has a way of arranging flowers far better than the most talented human artist. 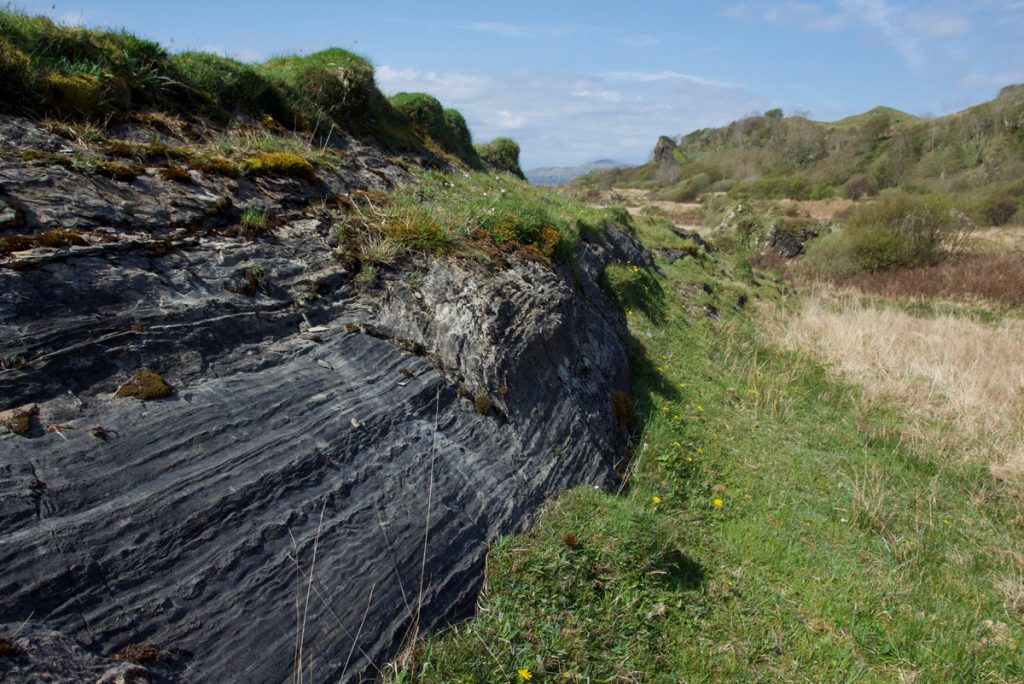 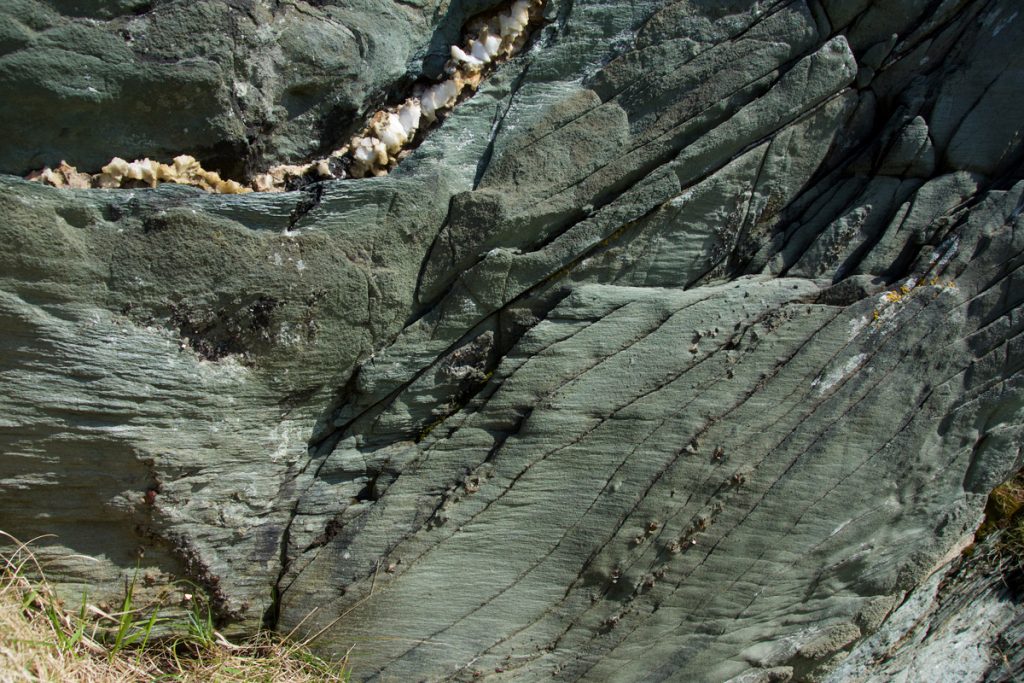 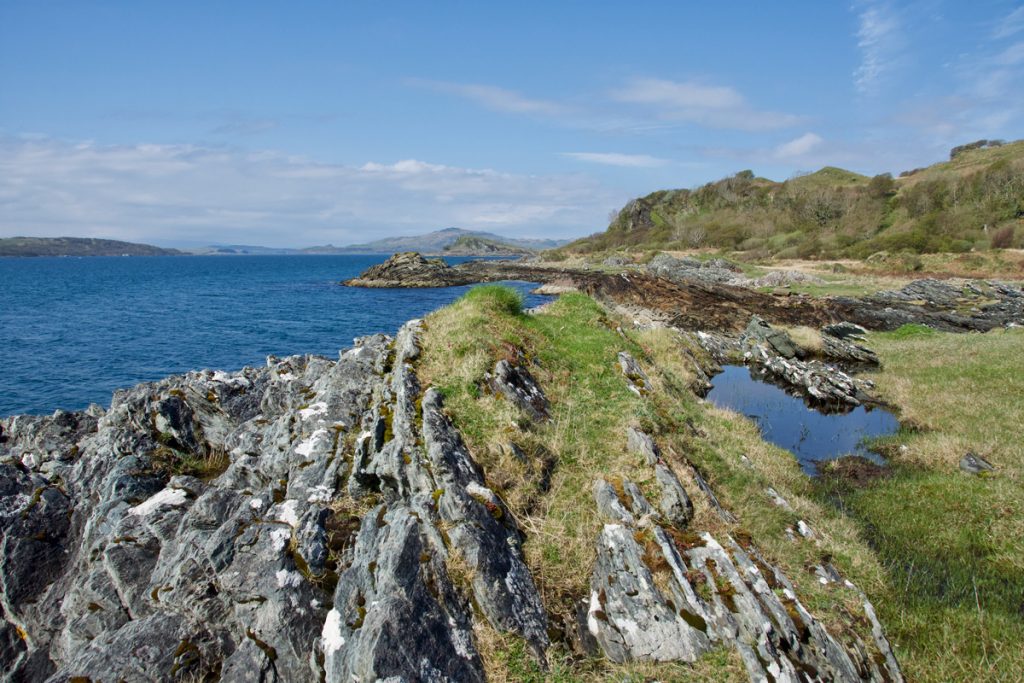 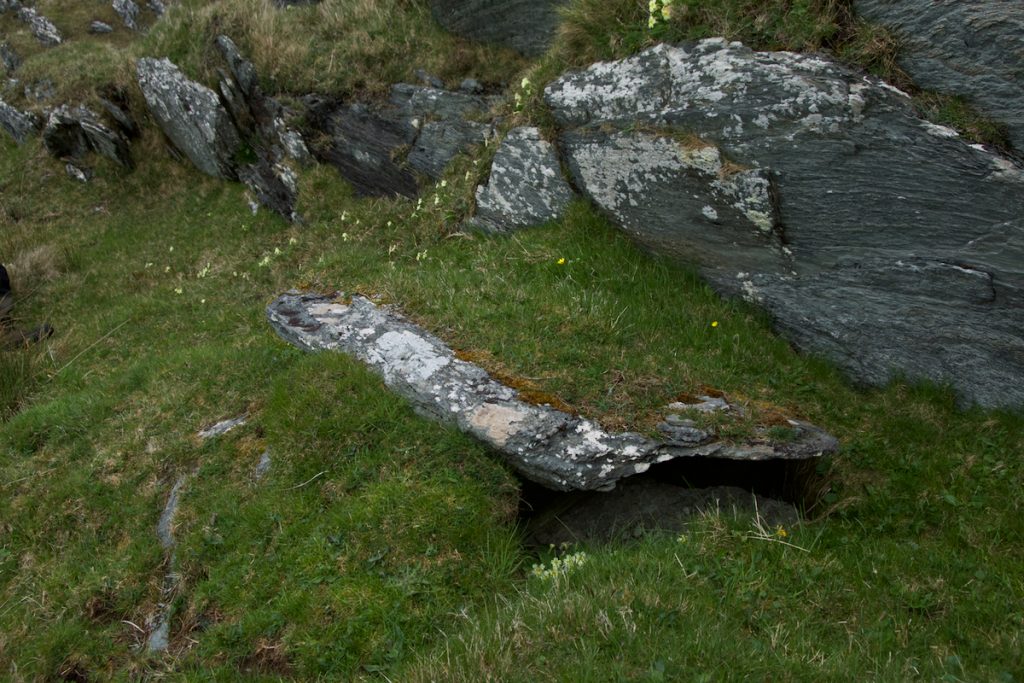 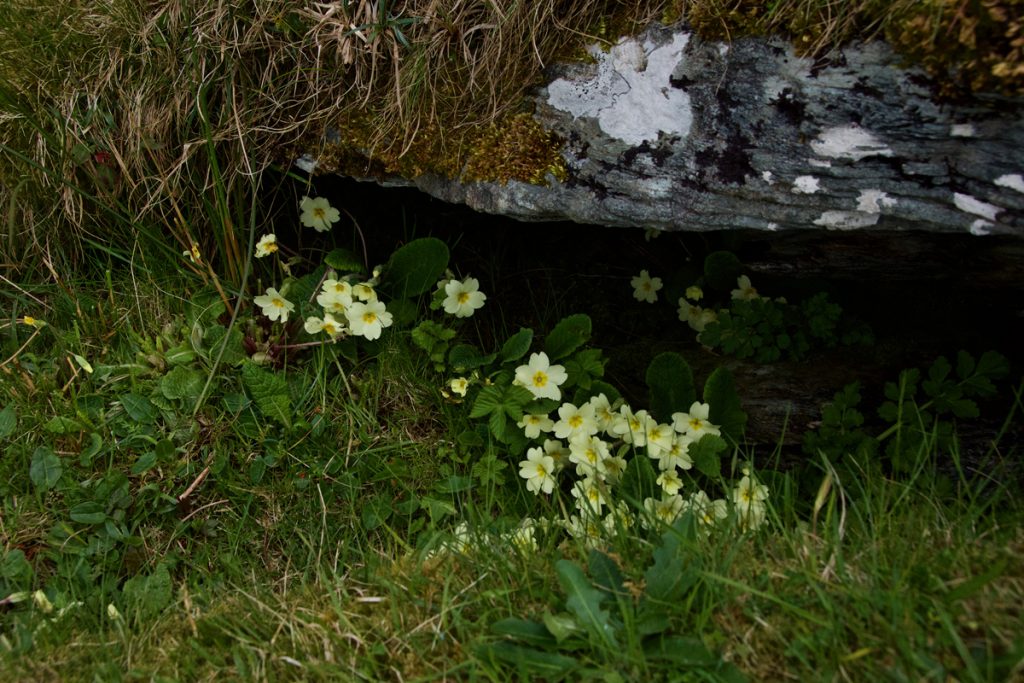 Our progress was pretty slow, because it felt as if every footstep brought some new kind of revelation. Colin in particular is fascinated by lichens and fungi, which usually grow in the wettest and most inaccessible places. We were thrilled to see early purple orchids – the first of the season – glowing like purple flames on a grassy ledge, having chosen quite a risky foothold right next to the sea. 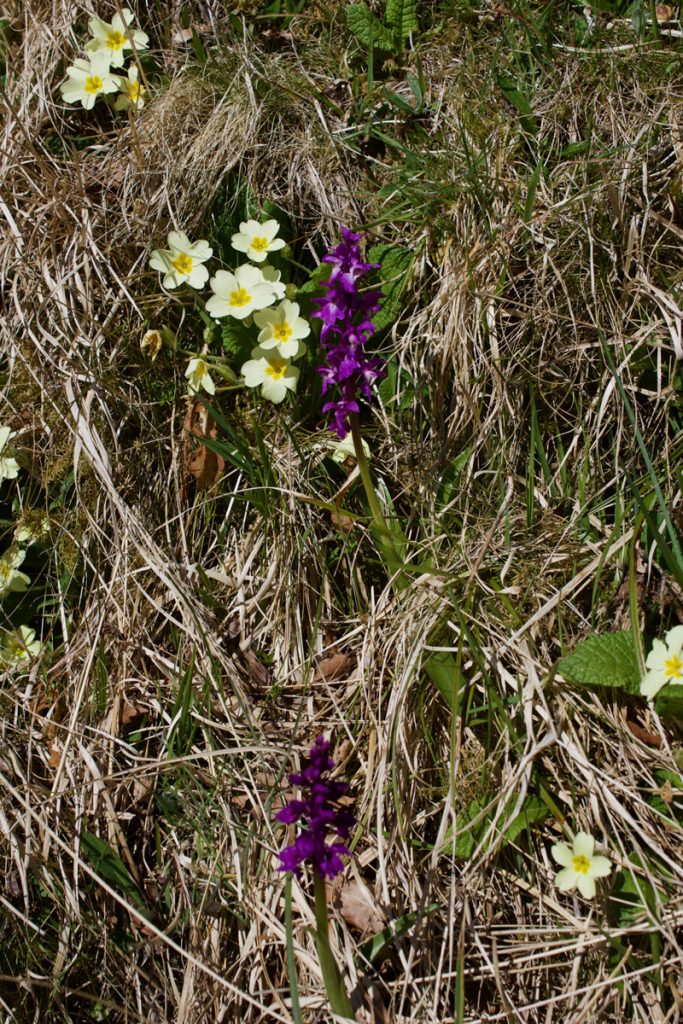 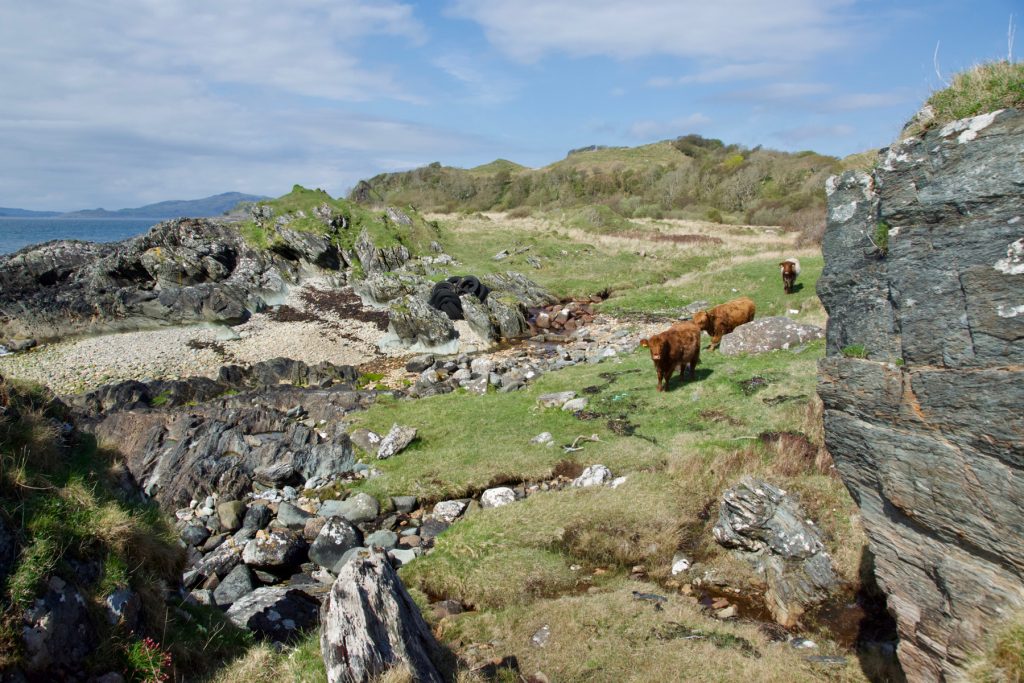 A group of Highland cows stared at us curiously as we clambered over a stile and into the wood that cloaks a steep headland. With hindsight, they were probably laughing quietly to themselves. The woodland, it turned out, was straight out of Lord of the Rings: low-growing birches, twisted and stunted by the weather, their new leaves just bursting from the bud and contributing to the general atmosphere of fresh, saturated greenness. So dense were their branches that we had to push and bend our way through them, stepping carefully over gullies of fast-running water. It was quite disorientating; when I looked up I couldn’t see where I was going or where I’d been. 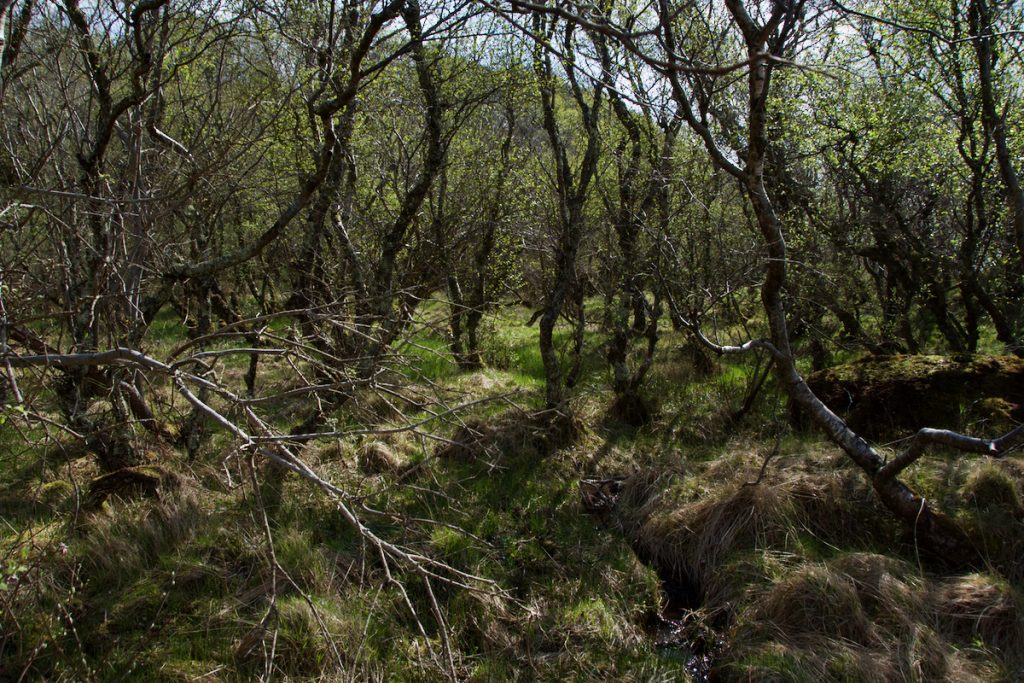 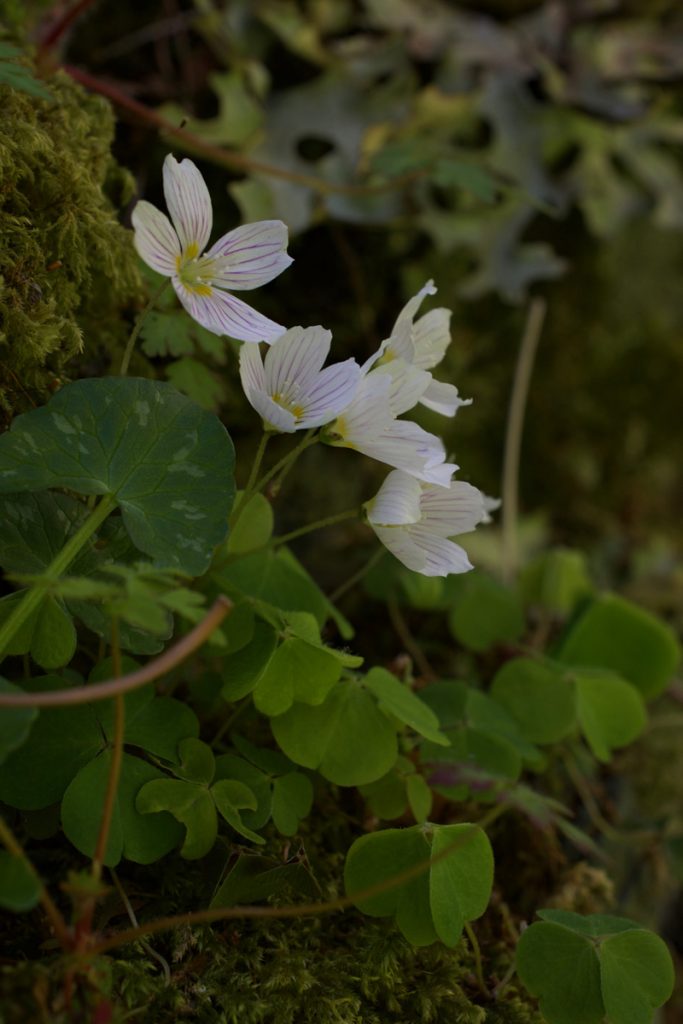 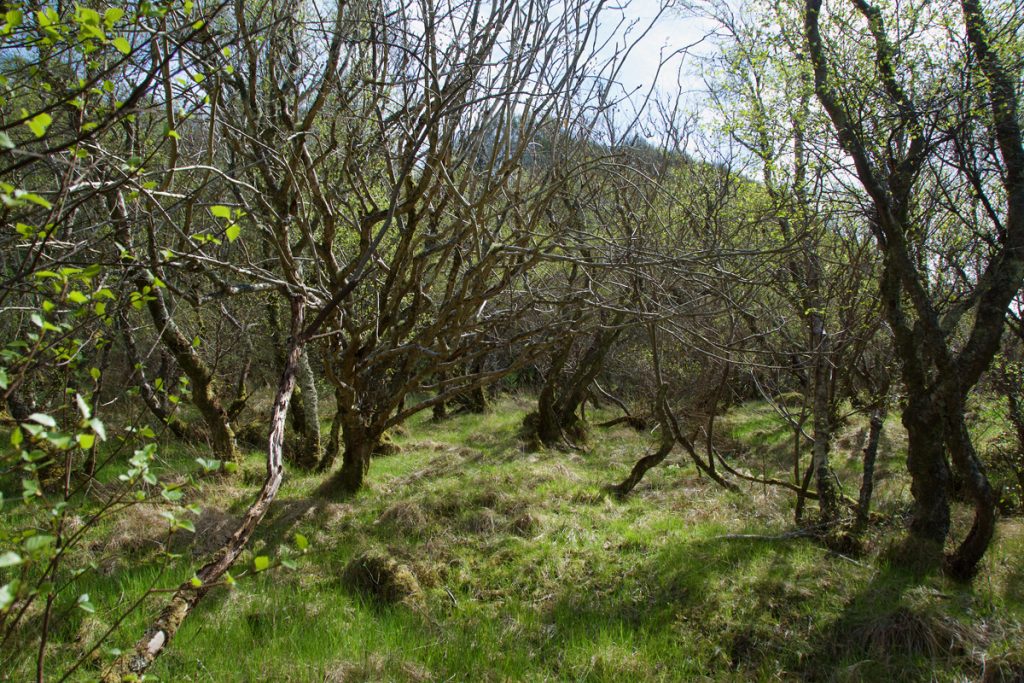 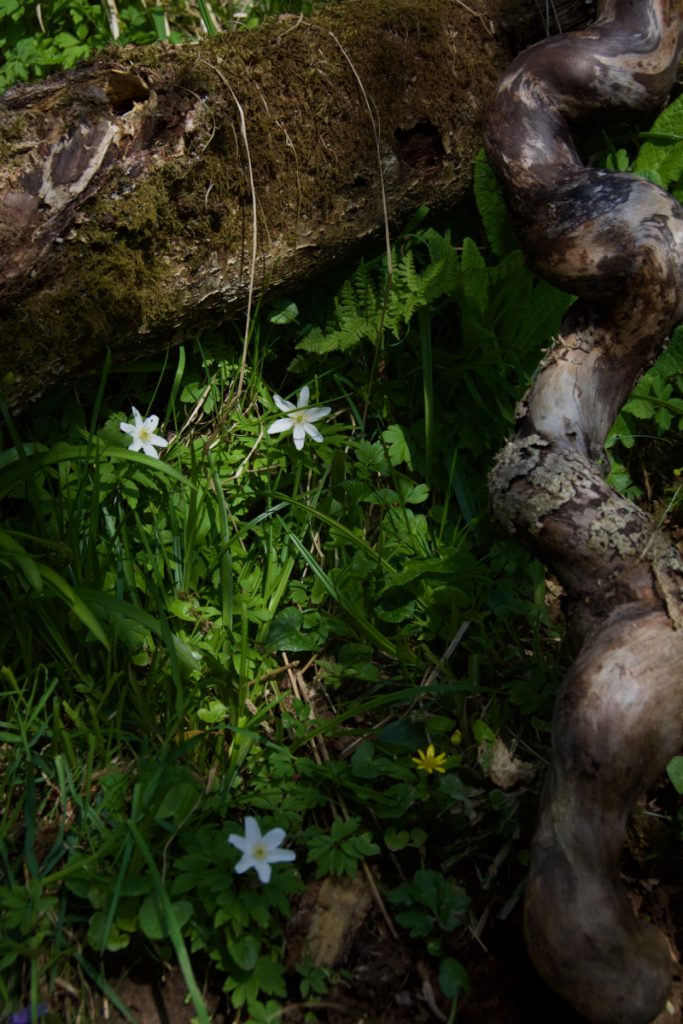 Abandoning our idea of making it over the top and round to the next bay, we retraced our steps back onto the shore. Defeated, but only temporarily, because there’s a site just over that headland that I really want to see. We stopped to look at the slaty pebbles crunching beneath our feet, and meanwhile through a gap in the clouds the sun poured liquid silver over the Firth of Lorn. 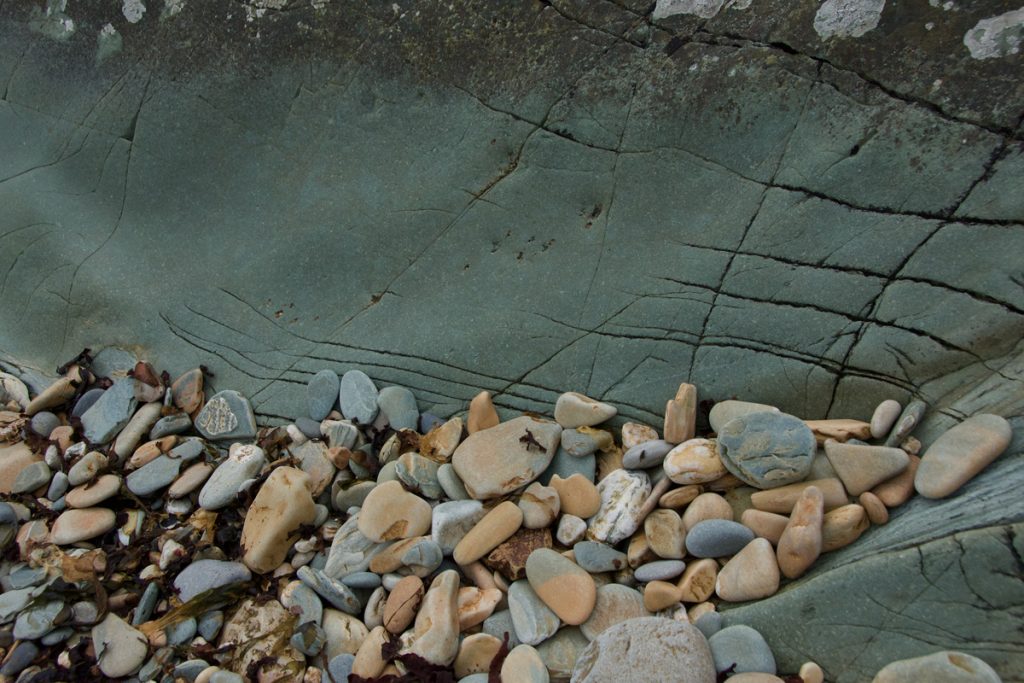 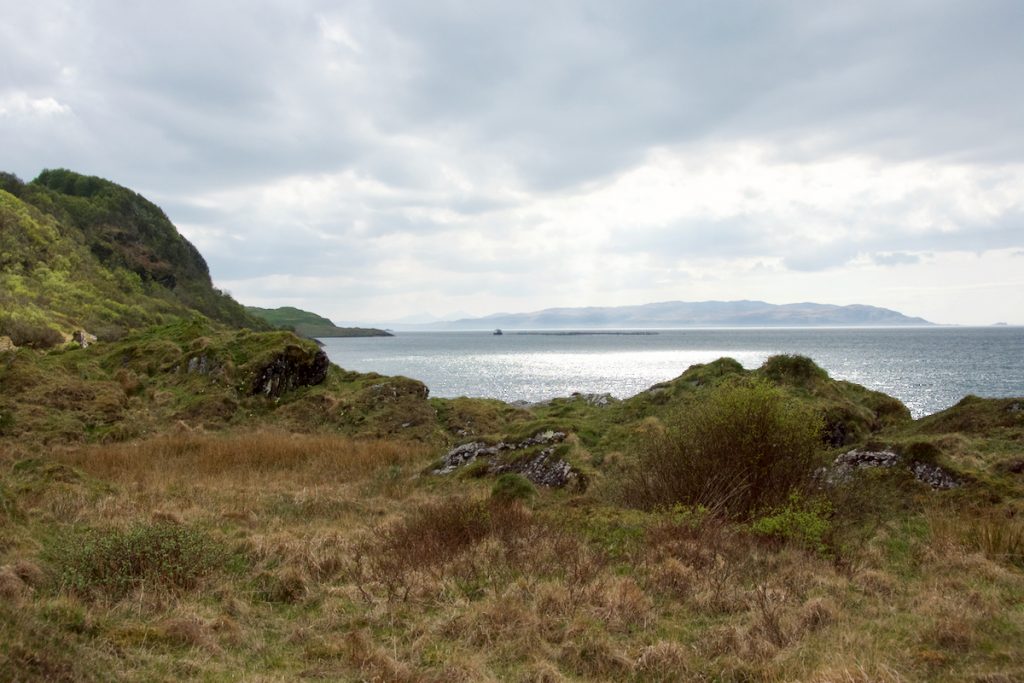 The days are drawing out now, so that there’s a glimmer of light in the north-west until almost midnight, and if you stand outside you catch the fleeting shapes of bats and owls against the indigo dusk. This place lives and breathes, perhaps more than anywhere else I’ve lived; it is probably down to the ebb and flow of the tide, and the trees that are never completely still. The cats sense it, and they become wide-eyed wraiths at night, slinking soft-footed into the undergrowth as if they know nothing about comfy sofas and roast chicken.

After a few fine days – warm but definitely not tropical – the soft fine rain has returned. Meanwhile I’m going to get the map out, because there’s somewhere I need to go… 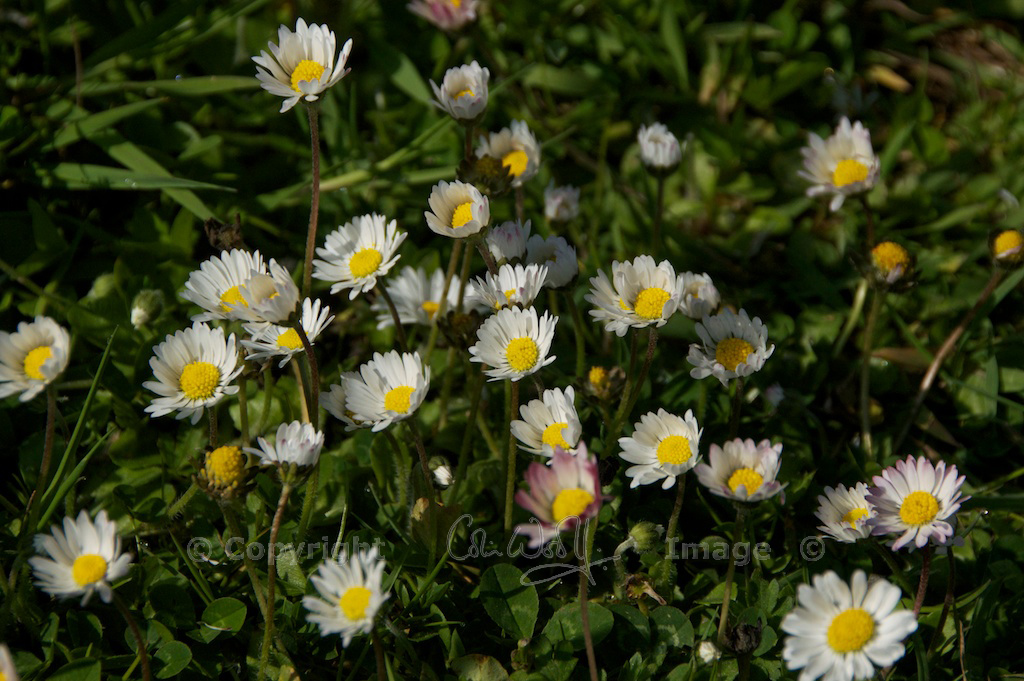 In a nutshell: the daisy or ‘day’s eye’ 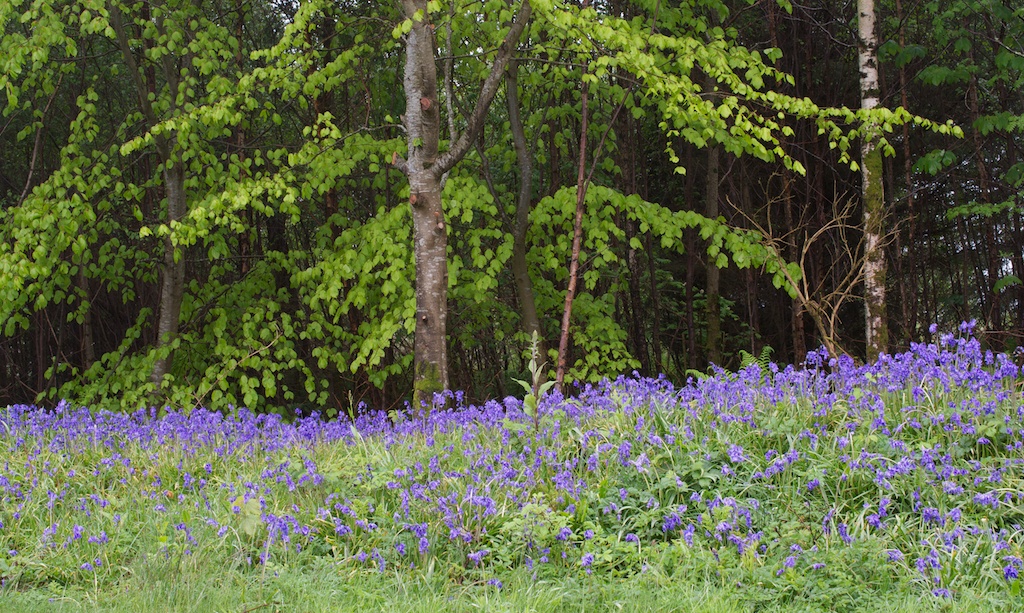 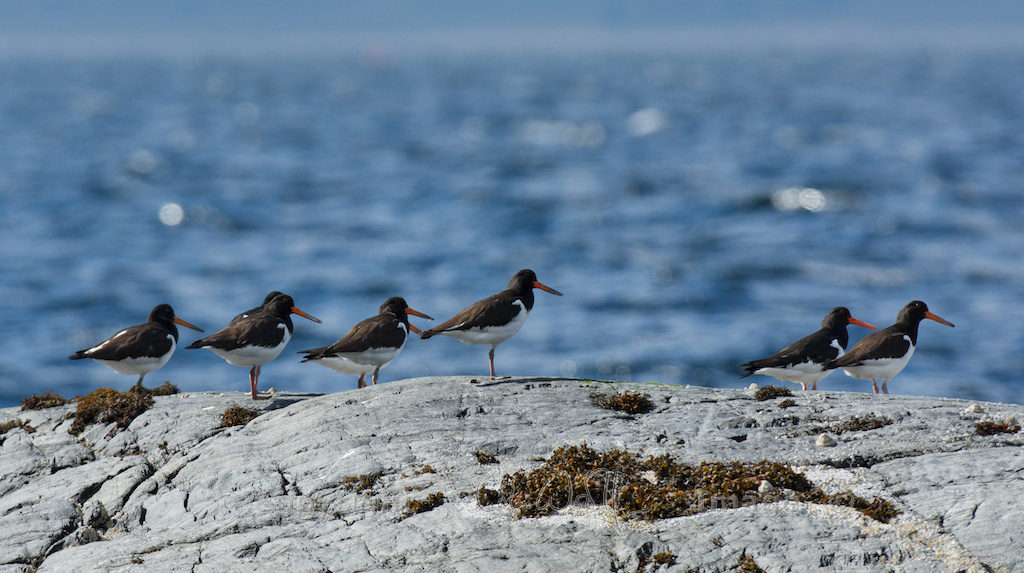 In a nutshell: the oystercatcher