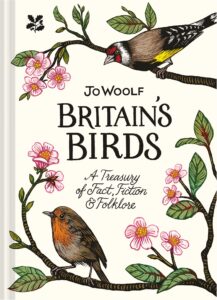 Britain’s Birds:  A Treasury of Fact, Fiction and Folklore

Published by The National Trust

In this follow-up to ‘Britain’s Trees’, I’m looking at around 70 of Britain’s best-loved bird species and finding out more about their natural history;  I’m also unearthing some curious tales of superstition and folklore which have been associated with particular species over the centuries.  Which birds, for example, are the fire-fetchers, daring to fly up to the Sun to bring back fire to the Earth?  Who is the ‘king of birds’, and how did he acquire that title?  What secret knowledge does the woodpecker possess, and why was it such bad news if you heard the Seven Whistlers?  This book was fascinating to research, and a joy to write.  I really didn’t want it to end!

Woven into the text are some lovely quotes from literature, both ancient and modern.   ‘Britain’s Birds’ is illustrated with 40 gorgeous images by Joanna Lisowiec.

“A hugely engrossing book, as easy to dip in and out of as it would be to read cover to cover – and one that would appeal to almost all ages.”  (Ettie Neil-Gallacher, The Field)

Available from Amazon and other bookshops.  Signed copies can be ordered via Colin’s website 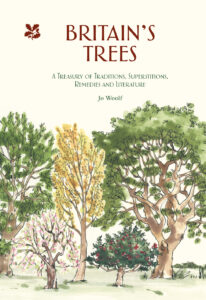 Britain’s Trees:  A Treasury of Traditions, Superstitions, Remedies and Literature

Published by The National Trust

Featuring 40 of Britain’s best-loved tree species, this book examines the vast wealth of folklore, traditions and superstitions that have grown up around trees over the millennia.  It contains information about their natural history and interesting quotations from literature;   there are also cameos about individual ancient trees that represent a significant part of our heritage.  With illustrations by Louise Morgan.

“This book is a brilliant record of old remedies, folklore and history of wooded places in the UK.”  (Zakiya Mckenzie, BBC Wildlife)

Available from Amazon and other bookshops.   Signed copies can be ordered via Colin’s website 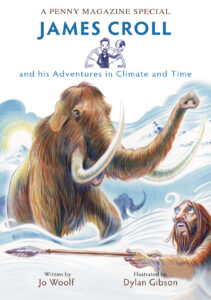 James Croll and his Adventures in Climate and Time

Born in 1821, James Croll was a brilliant-minded Scotsman who defied poverty and ill health to become one of the greatest scientists of his day.  Despite a lack of formal education, he managed to teach himself about physics and astronomy and predict the pattern of the Earth’s ice ages.  He is now acknowledged as one of the world’s first climate scientists.  Published to mark the bicentenary of Croll’s birth, this children’s book tells his astonishing story in words and pictures.

Fully illustrated with the fabulous artwork of Dylan Gibson. 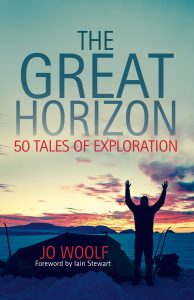 The Great Horizon:  50 Tales of Exploration

The Royal Scottish Geographical Society has links with some of the most iconic and inspiring figures in the history of exploration.  This book celebrates some of these amazing people and tells their stories.  It’s not simply historical, although it includes ‘greats’ such as Scott, Shackleton, Hillary and Heyerdahl.  There are contemporary explorers too, whose wide-ranging work has earned them well-deserved recognition and awards.  As Writer in Residence at RSGS, I’m privileged to be able to meet some of them in person, and talk to them about their challenges and their vision.

With a foreword by Professor Iain Stewart, President of RSGS.  Available from Royal Scottish Geographical Society.