It’s hard to imagine when the thrushes actually sleep. They’re singing well after 10.30 at night, and in full voice again around 4 in the morning. Even after nightfall, while I’ve been waiting around for Purdey to come in (and she likes to take her time!) I’ve heard them singing quiet little songs to each other, while roosting up in the trees at the back. They just can’t help themselves – they’ve got to sing. 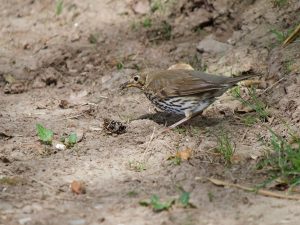 In the daytime, however, the singing has to take a back seat to their busy schedule. Newly fledged youngsters are already hopping around expectantly, cheeping now and then in case their over-worked parents delay pushing worms, snails and slugs into their ever-gaping beaks. So intense is the pressure that the adults scarcely seem to notice us walking about the garden: yesterday one of them was swinging a hapless snail onto the gravel just a few feet away from me, while its partner was diligently patrolling the lawn. 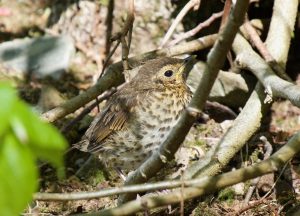 If the parent birds are bold, the babies are reckless: a young thrush cheeped and hopped its silly way into the porch yesterday, and then started scrabbling nervously against the window in preference to the wide-open door. I was on the phone at the time, and had to ask the person to hold on while I went to the rescue. The moment I opened the inner door from the sitting room, both Clyde and Purdey appeared as if from nowhere and hurled themselves into the porch, giving me a split-second chance to seize the bird and launch it into the air. Luckily it flew, protesting loudly. The cats were disgusted. 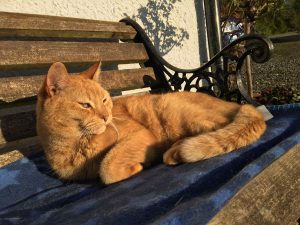 Thrushes, you say?  Yes, I’ve heard tell of such creatures.

It’s not just the thrushes that seem to be having an amazing spring. The first blackbird youngsters are now at large, adult-sized yet still fluttering their wings in expectation of ready meals; and the other morning a baby robin, brown-speckled with an endearing yellow gape, tumbled noisily onto the rooflight of the kitchen and ‘seeped’ plaintively down at me, before flapping off to find his attentive parents. The chiffchaffs, willow warblers and blackcaps are in full and vibrant song, although it’s almost impossible to find their nests. We did, however, come across a chaffinch – at least, that’s what we suppose it is, because she was well above head height – sitting wide-eyed and motionless on her cup-shaped nest, artfully moulded against the trunk of a sycamore. 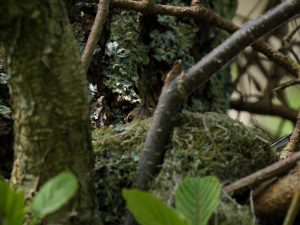 The swallows arrived on 10th April, and we’ve been hearing the cuckoo since the 24th. Such an evocative sound, which carries with it all the warmth and scents of summers past, and the prospect of more to come. One morning it was calling directly behind the house, before moving off to more distant woods. No doubt by now the female will have found the nest of some unsuspecting pipit or hedge sparrow in which to lay her egg. The geese down on the shore – greylags and Canadas, mainly – will be brooding already. They’re calling long after sunset, and from the house we can see them moving around on the water, little specks swimming in a sea of gold. 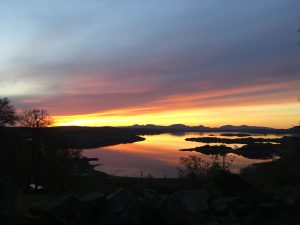 Dusk is the time for the tawnies to wake up, much to the alarm of the blackbirds. I don’t think any blackbird will ever get used to the sight of a tawny owl stirring from its roost, no matter how many times it sees it (and it’s a nightly occurrence, after all). Blackbirds routinely make a fuss before going to bed, but this apparently unexpected event throws them into full-blown panic. A couple of nights ago, again while I was waiting for Purdey to wend her leisurely way indoors, I opened the balcony door and saw a tawny swoop down onto the ground below the beech trees, dark-eyed and beautiful. I’m not sure if she’d caught something, but she flew off straight away, pursued by a squawking blackbird. I know their favourite perch, on waking, is in the oak tree across the road. Close by, the ground under the big boulders and the compost heap is a hotbed of voles and mice. Purdey will tell you that, because it’s her favourite place. 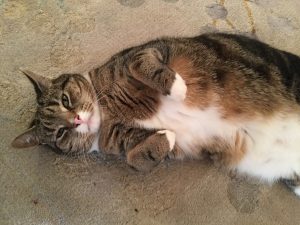 Don’t expect me to tell you anything.  And don’t touch my fluff!

This morning’s rain, as well as dampening the garden, will have brought out more slugs and snails for the grateful thrushes. Judging by the number of broken snail shells that are strewn on all the paths, the babies are going to be bouncing with health. 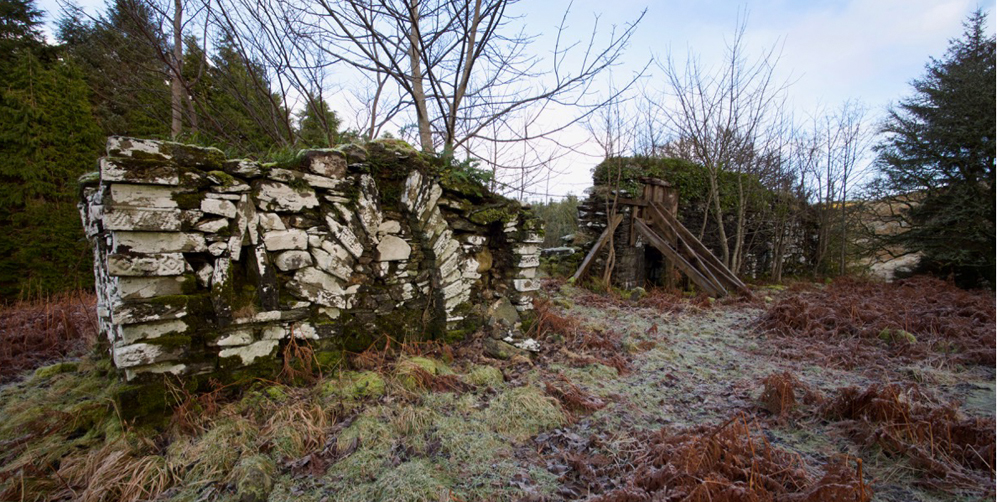 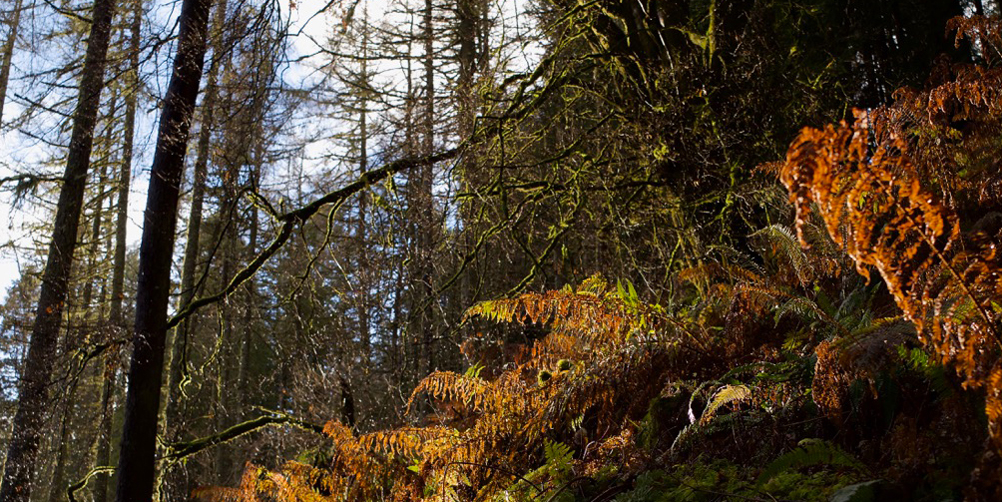 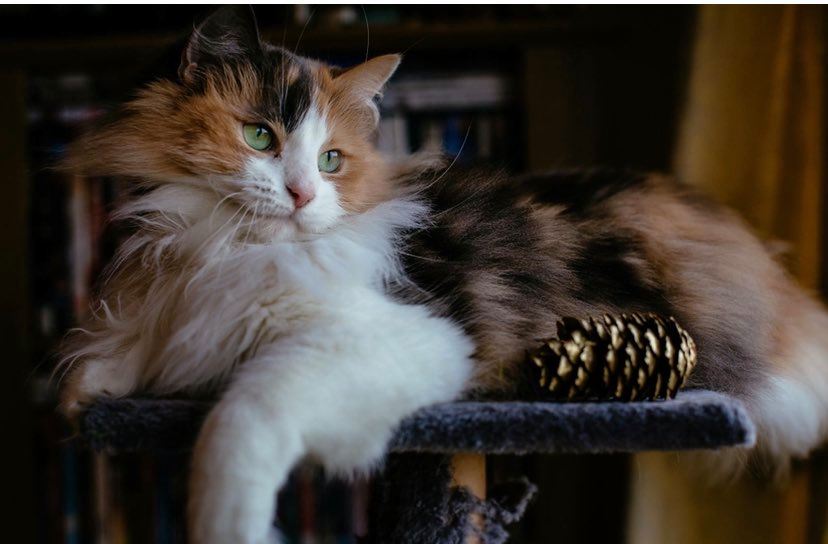