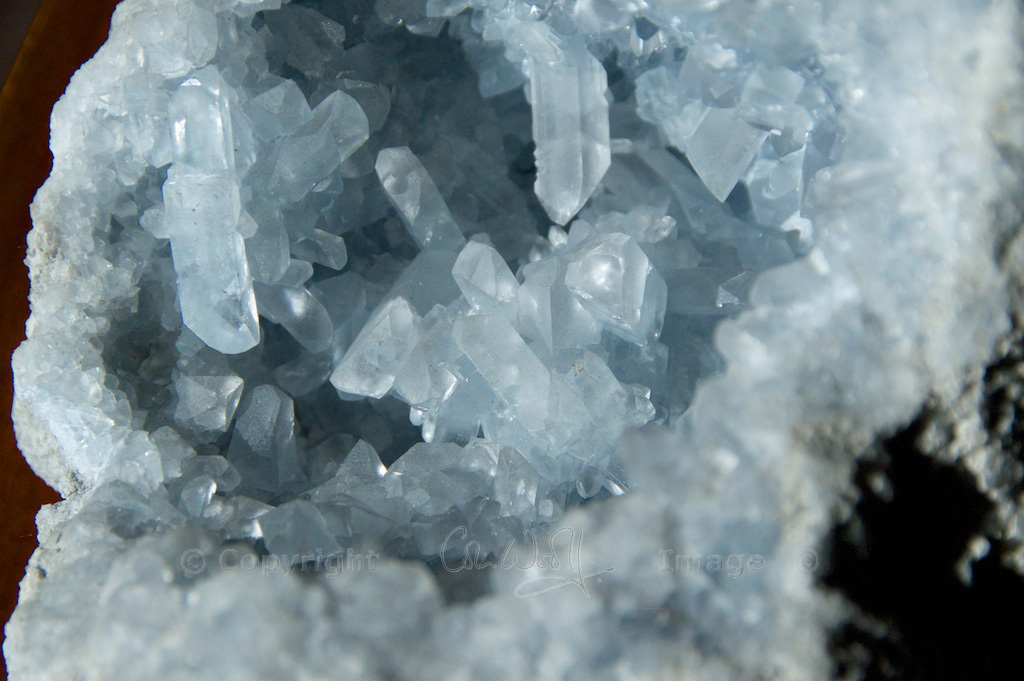 One of the biggest mineral specimens I have is a geode of celestine.

It is perhaps seven inches across at its widest point (that’s a two-pence piece for comparison) and it weighs nearly 6 lb (2.7 kg) in weight.   In shape it’s like a partly squashed sphere, with one side cut away to reveal a Merlin’s cave of pale blue crystals – celestial blue, because that’s where the name comes from.

It was found in Madagascar;   I know this, because a friend brought it back with him after a visit there many years ago.

Celestine (or celestite) is a natural form of strontium sulphate, and it occurs in sedimentary rocks throughout the world.  It can also be found in the cavities of volcanic rocks.  According to geologists, there are good sources in Sicily, Poland, Mexico and (surprisingly) in South Gloucestershire, England, where it was mined for strontium in the 19th and 20th centuries.

On South Bass Island in Lake Erie, USA, there is a celestine cavern so big that you can go inside and walk around.  Few photos are available but the crystals look to be cloudy or opaque rather than clear.  For mineral collectors, the source of the most beautiful celestine specimens is still Madagascar.

The celestine that was mined in England was taken to Germany where the strontium extracted from it was used in the refining of sugar beet.  Amazingly, when this practice was at its peak, 90% of the world’s supply of celestine could be traced to a quarry near Bristol.   This quarry has now closed, and, as one keen amateur geologist observed rather sadly, a shopping centre has been built on top of it.  I was interested to read that strontium is used in fireworks, as it burns with a brilliant crimson flame.

In its purest form celestine is colourless:  the delicate light blue shade comes from impurities within the rock.  This colour may fade in strong sunlight.

Because it is quite soft and brittle, celestine is seldom used for carving, and in jewellery it is usually kept in its natural state.  (My thanks to the owner of the Etsy shop Sequoia’s Roots for allowing me to reproduce this photo of a beautiful celestine pendant).

My own geode is fragile:  the outer surface is powdery, and it is very prone to crumble when touched.   Over the years I’ve collected a handful of tiny shards of crystal that have fallen out of the centre.  However, I don’t like storing it away in a cupboard:  crystals should be enjoyed and admired!

In ancient times, celestine was said to promote peace, harmony, truth and wisdom, and the Greeks and Romans believed that it had the power to drive away evil.  Some websites claim that celestine originated in the Pleiades star cluster, which is an intriguing theory.  I should add that these websites are New Age/astrological rather than scientific.

Making contact with your guardian angels, giving courage to public speakers, recollecting dreams, bringing calm to chaos – celestine is said to be useful for all these things.

Whether you’re a scientist or a spiritualist, or just fascinated by rocks, like I am, you can’t fail to be spellbound at the beauty created by our planet’s natural forces!

If you love crystals, you might like to read some of the other features in my series:

or take a look inside one of my favourite crystal and fossil shops – Mr Wood’s Fossils in Edinburgh. 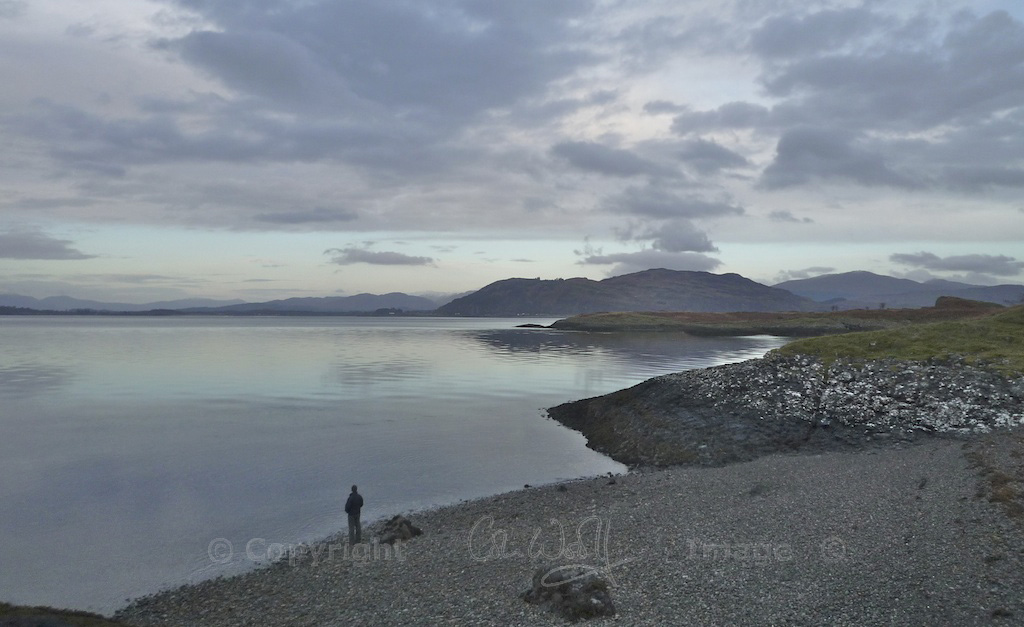 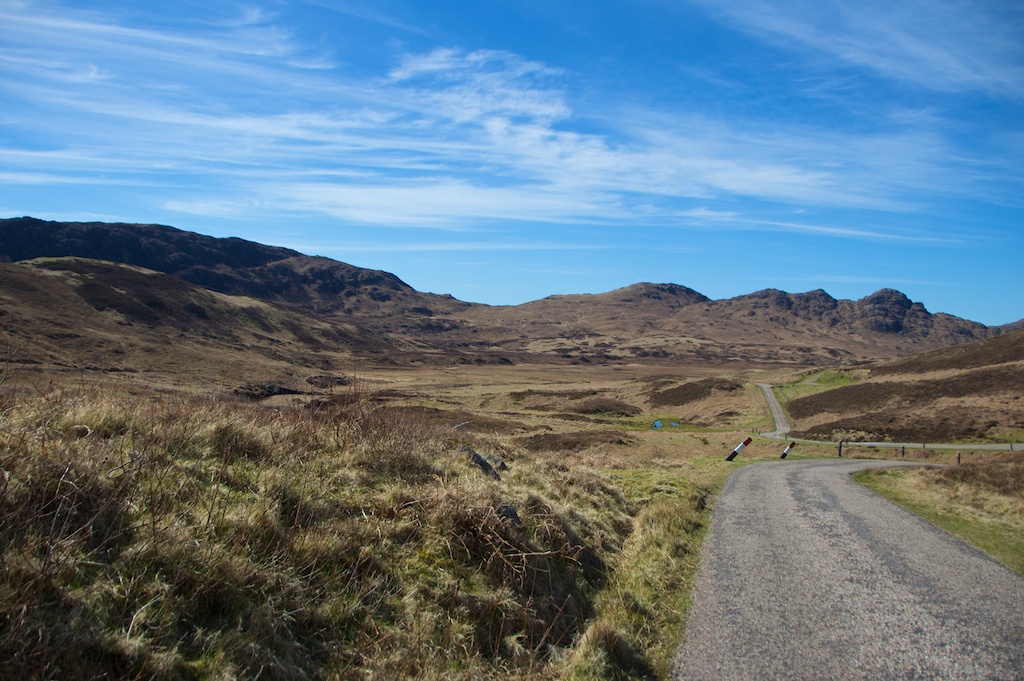 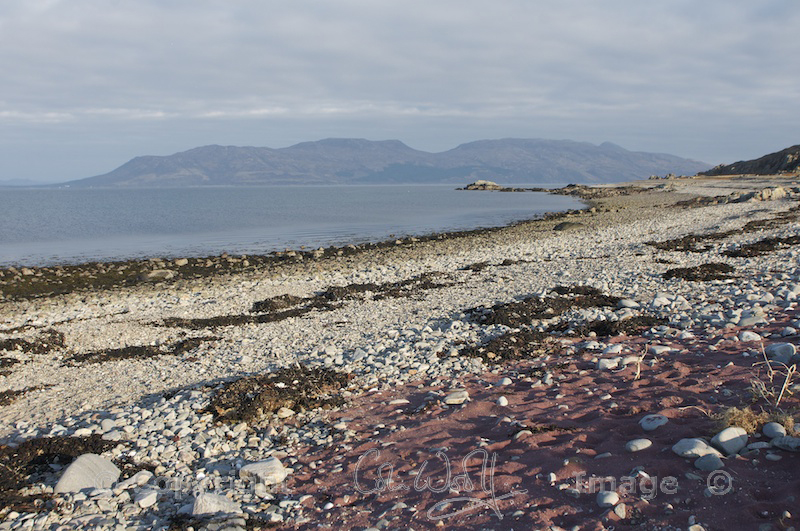