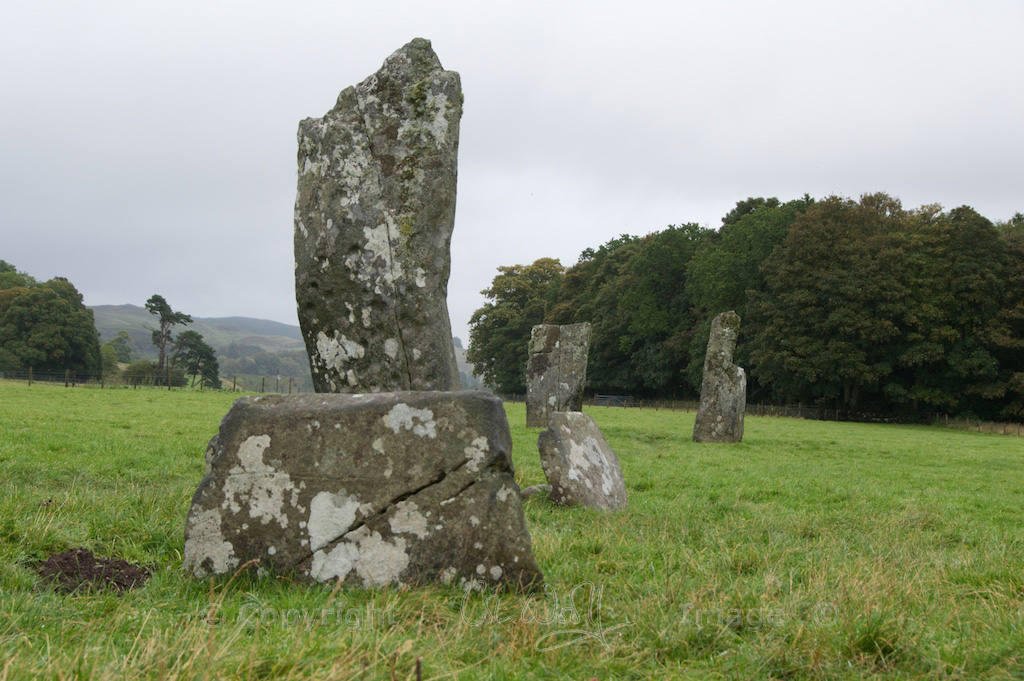 When you open an OS map of Kilmartin Glen in Argyll, you’re tempted to think that you’ve stepped back into the Bronze Age.  The area is simply littered with prehistoric sites:  chambered cairns, hill forts, stone circles and cup-and-ring-marked rocks jostle for prominence in fields and on hillsides, outnumbering modern place names and presenting an almost too tantalising choice of which to visit first.

Why is there such a concentration of these sites in Kilmartin Glen?  Archaeologists aren’t really sure, but the fact that this region has been in continuous occupation for many thousands of years suggests that its features – whether seen or unseen – held great significance for both the living and the dead. 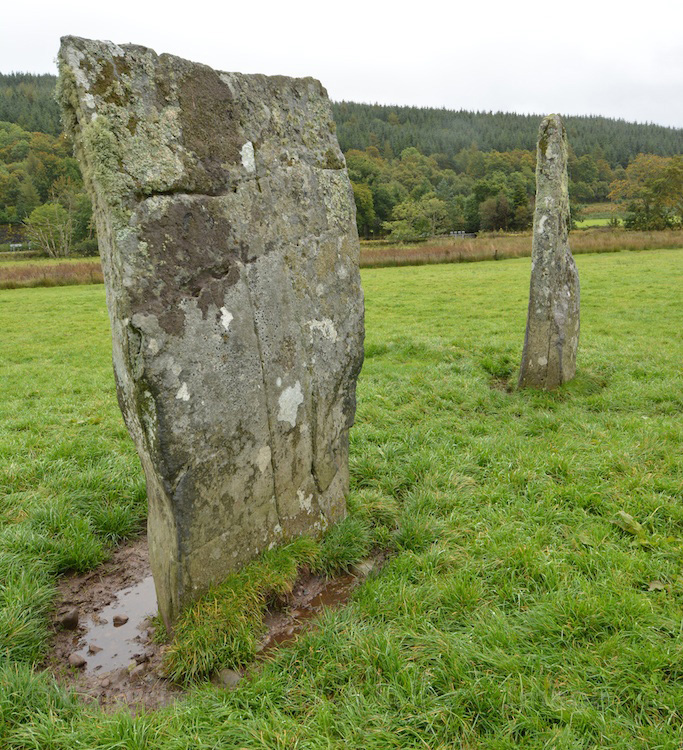 To present a complete and detailed picture of the entire landscape would take many years of visiting and research, but I’ve got to start somewhere… so where better than this intriguing arrangement of standing stones at Nether Largie.

Nether Largie stands a couple of hundred yards to the right of the B8025, which leads from Kilmartin to Tayvallich.  In fact, it is neither a circle nor a row, but when viewed from above (as shown on the information board below) it resembles a very long and narrow rectangle formed by two pairs of stones, aligned on an axis that runs north-east to south-west, with a fifth stone in the middle.

All five stones are either just over, or just under, nine feet in height.   A sixth stone stands 100 metres to the north, but this is considered an outlier rather than an integral part of the group.

The central stone dominates an arrangement of five or six smaller boulders that (because of their size) can’t really be called standing stones but would perhaps better qualify as squatting or sitting ones.   It’s impossible to tell what the central stone would have looked like, all those thousands of years ago.  Over the millennia it has been fractured and weathered to a sliver, so that one edge resembles a knife blade, and colonies of lichen are enjoying penthouse accommodation on its upper levels.  What is more interesting is that it is marked with an apparently random pattern of small cup-shaped indentations;   these are undoubtedly man-made, but their purpose is still eluding archaeologists and scientists alike. 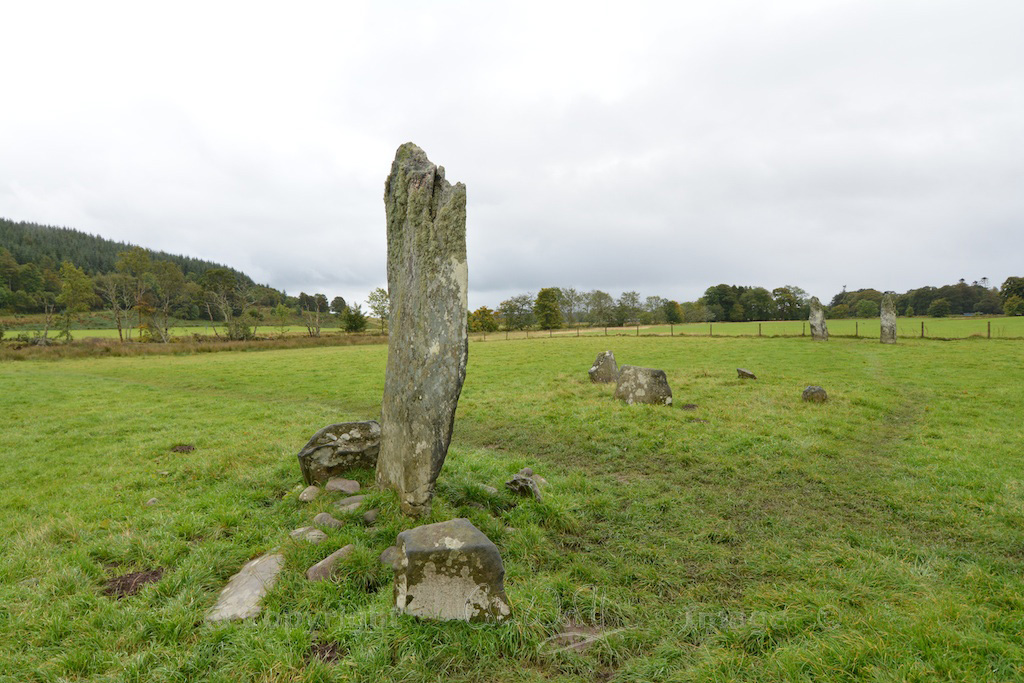 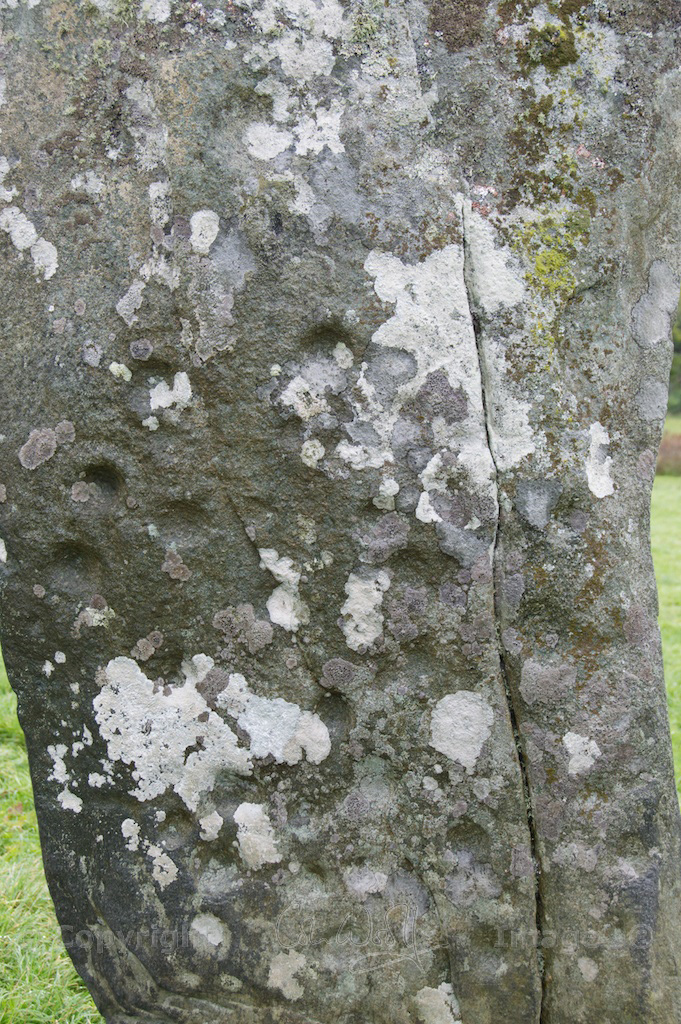 Alexander Thom, the celebrated historian and student of stones, visited Nether Largie in 1970 and claimed that it was among the most important sites in Britain in terms of its astronomical alignment.   He believed it was a lunar observatory, designed to predict an eclipse.  Thom was among the first of his kind to put forward such a radical idea, and at the time his theories were met with polite scepticism.  But he was a true visionary.

More recent studies have revealed the fascinating possibility that the stones were meant to mark the setting or rising of the sun or moon on important days such as the winter solstice:  two of the stones are aligned with the midwinter sunrise, and other alignments have been identified, such as the southern-most rising or setting of the moon.   (The online archaeology magazine, Antiquity, has some excellent photos and illustrations of solar and lunar alignments at Nether Largie and a neighbouring stone circle at Temple Wood.)

It has also been suggested that, although Nether Largie was ‘built’ around 3,200 years ago, the carvings on the central stone may have been made 1,500 years previously, when the stone formed part of the bedrock of another, as yet unidentified site;   a block containing the rings was subsequently hewn out of this rock and transported to Nether Largie.   This is an interesting idea but it sounds like a lot of hard work – and I’m willing to bet that the ancient inhabitants of this glen felt the same way, if the proposal was put to them!

And what do the perplexing little potholes actually signify?   Are they a map of the sky, or part of it?   Do they mark a point where the moon appears to be swallowed by the stone – or emerge from it?   What’s for certain is that our ancestors were compelled to spend their days and nights getting their positions absolutely right – and afterwards, who knows what they did?

If Nether Largie is sharing its inner secrets with the sheep, it’s unlikely that they’ll agree to be interviewed.  All we can do is walk between these silent stones, and wonder. 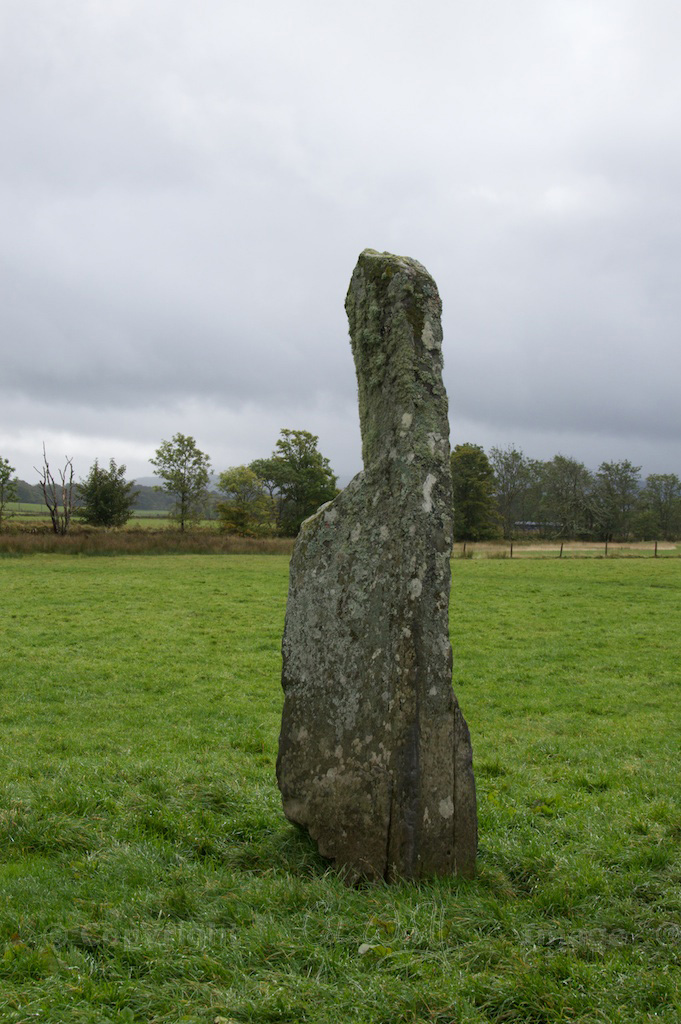 Nearby in Kilmartin Glen…

Not far from Nether Largie lies the fascinating burial chamber of Dunchraigaig, and a few miles further north is the impressive standing stone at Kintraw, overlooking Loch Craignish.

I’ll be adding more sites as soon as I can, so stay in touch! 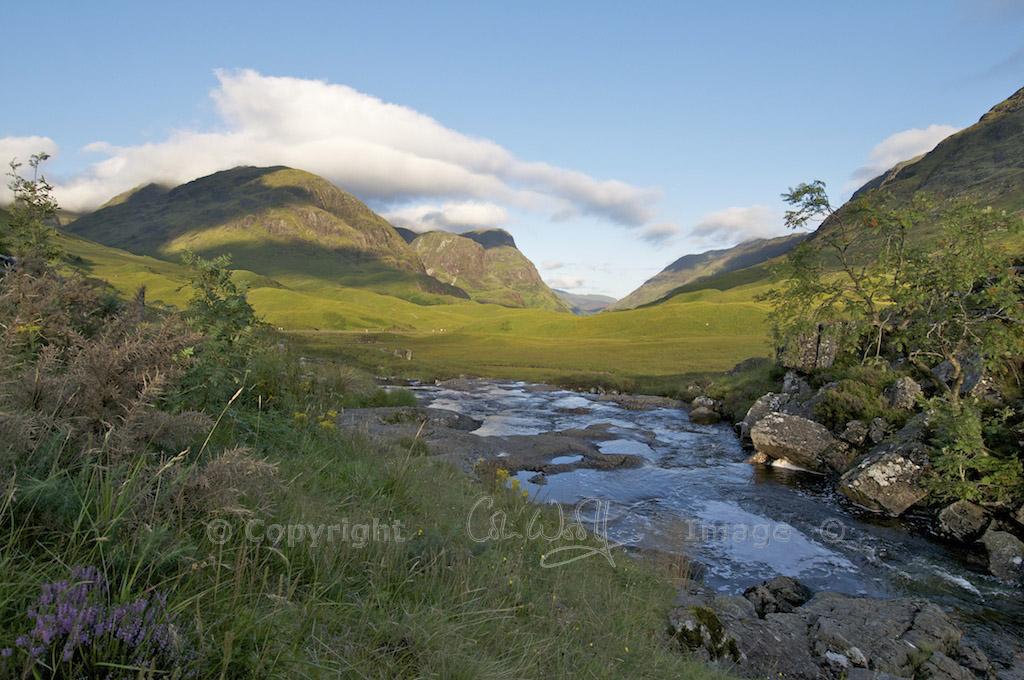 In a nutshell: ‘The Curse of Scotland’ 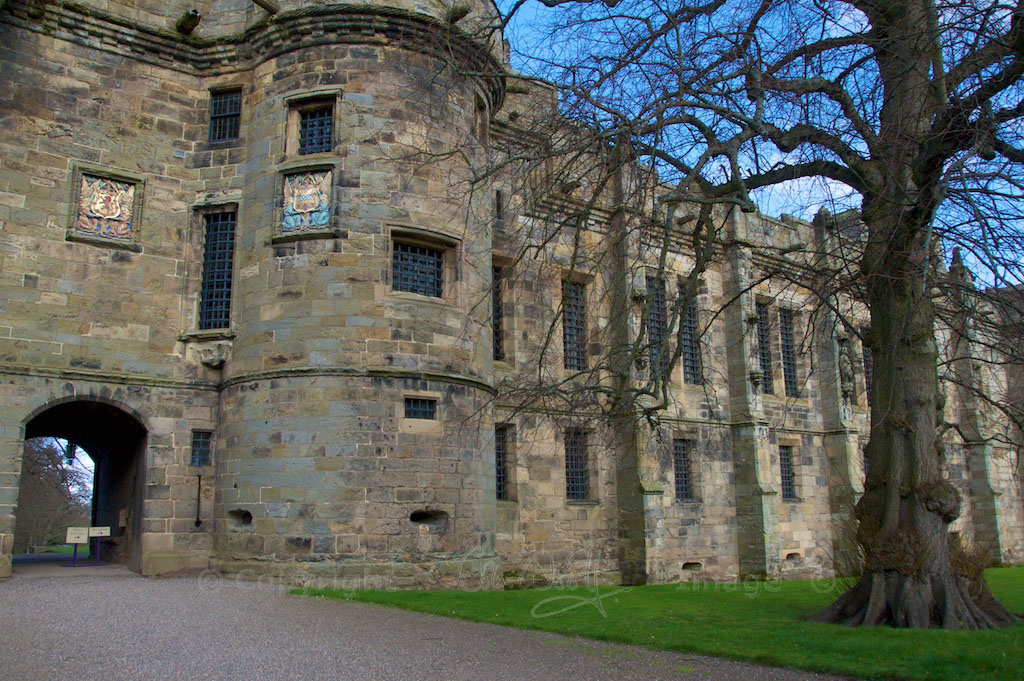 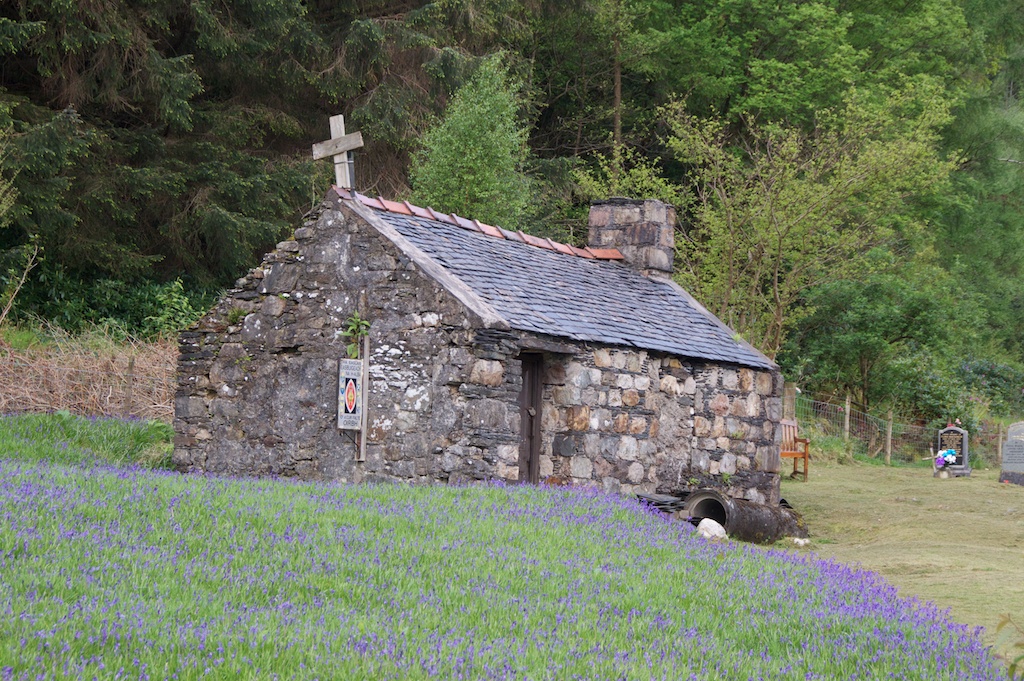