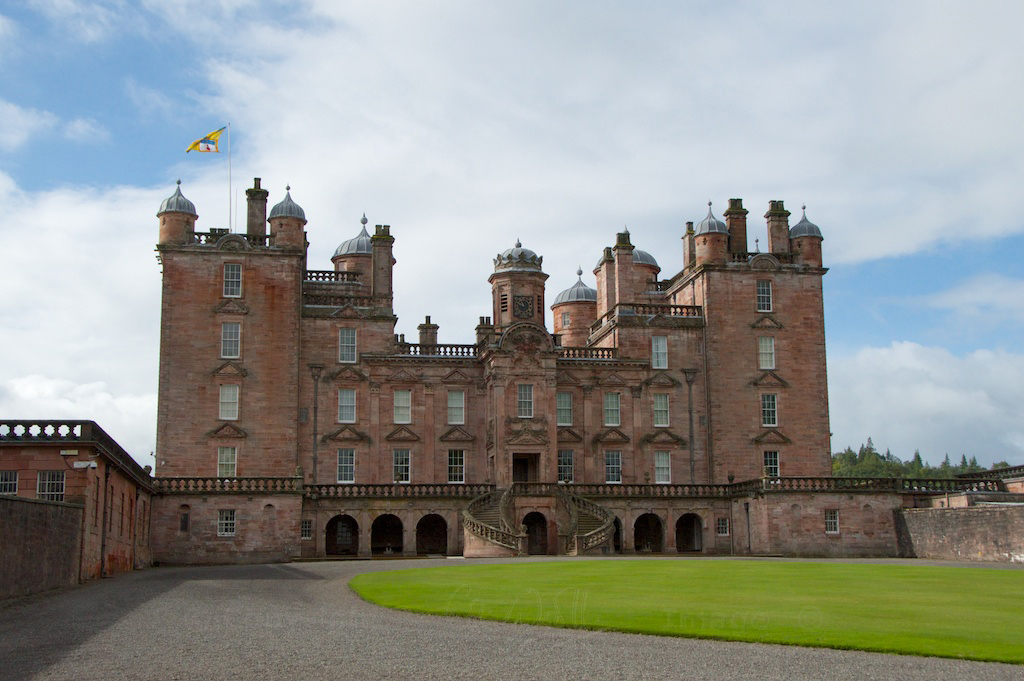 In August, Colin had a stand at the Galloway Country Fair which was held in the grounds of Drumlanrig Castle.   The route into the showground took us through woods and parkland and finally down a straight, tree-lined drive towards what is emphatically one of the most impressive looking castles I have ever set eyes on.

Known as ‘the Pink Palace’, Drumlanrig is built from pink sandstone, but it’s not necessarily its lovely colour that strikes you first.  The symmetry of its shape, the battery of scroll-topped windows gazing out across its vast acres, its square towers topped with cupolas like iced gems, and the central clock tower adorned with its own coronet… there’s no doubt that Drumlanrig was designed to impress, and it still draws the eye like a magnet.

Completed in 1697 from plans that were originally drawn up in 1618, Drumlanrig is a true castle only in name;   it is better described as a palace.   Two earlier castles are believed to have stood on this site, one of which was probably a 14th century tower house.  The second castle, which was apparently visited by James VI in 1617, was demolished to make way for the Renaissance masterpiece that now stands here.

According to the Royal Commission on the Ancient and Historical Monuments of Scotland, the architect is believed to have been James Smith, who had worked on Holyrood Palace, Edinburgh.   In fact, much of the detail was influenced by Holyrood, including the coroneted cupola.

Home of the Duke of Buccleuch and Queensberry

William Douglas, the 1st Duke of Queensberry, was the man responsible for the pink glory of Drumlanrig Castle as it appears today.   His title was handed down through three more generations but the 4th Duke died with no legitimate heir, so the title and estates passed to his second cousin once removed, who was a Duke already – the Duke of Buccleuch, Henry Montagu Scott.  Henry added Douglas to his own name, making the family surname of Montagu Douglas Scott;   and this is why the present owner of Drumlanrig, in addition to being the Chief of Clan Scott, is both the Duke of Queensberry and the Duke of Buccleuch.  I wonder if there are mornings when he wakes up and can’t decide which to be?

The name of Buccleuch

The title ‘Laird of Drumlanrig’ has its roots in the 14th century, and has traditionally been carried by members of the Douglas family;  but the name of Buccleuch (pronounced buck-looh) goes even further back, to the 10th century, when Kenneth III of Scotland was out hunting in a ‘cleuch’ or ravine in the forest.  According to the legend, a young buck was cornered and reacted by charging at the king.  John Scott, one of the king’s attendants, seized the animal and wrestled it to the ground, saving the king’s life.  For his bravery, the king decreed that the Scotts forever after would carry the name ‘Buck Cleuch’.

There are some things I need to explain here.  Firstly, you can’t go around Drumlanrig Castle unattended:   you must book yourself on a guided tour, and these only take place during the summer months.   Secondly, photography indoors is strictly prohibited, partly because of the collection of mind-blowingly priceless paintings that hang on the walls, and partly because of the equally priceless pieces of furniture.  In fact, a painting by da Vinci (‘Madonna of the Yarnwinder’) was stolen from the castle in 2003, and although it was recovered four years later and is now on loan to the Scottish National Gallery in Edinburgh, it’s evident that the security at Drumlanrig has had to be stepped up.

While I am not the best person at being shepherded around a place, always thinking of relevant questions at the wrong times and lingering too long over the wrong things, I did find the guided walk very interesting.  Our guide, Ralph, was entertaining and extremely knowledgeable, and he certainly helped bring to life the characters who stared down at us from the oil paintings.

From the kitchens we were led up into the entrance hall, where a tapestry embroidered by Mary, Queen of Scots shows Elizabeth I (not her closest friend!) with a beard, which was meant as a studied insult;  passing through dining rooms and drawing rooms with immaculately polished furniture and portraits on a palatial scale, we went upstairs where we found the chamber known as Bonnie Prince Charlie’s Room, which has been untouched (apart, I guess, from a little careful dusting) since the Prince slept here in December 1745.

The Prince certainly didn’t travel light.  Ralph told us that, during the occupation of the Castle by the Prince and his retinue, a number of strongboxes containing money were bolted to the floor of the bedroom;  and, unbelievably, a party of pack ponies were quartered in the corridor outside his room.  It would be interesting to know what the Duke made of that – or, more to the point, the Duchess.

And the royal bed… rock hard, lumpy, packed with horsehair and draped with decaying tapestry, it certainly didn’t offer the prospect of a decent night’s sleep.  I shuddered at the thought of it.   But I was very struck with a beautiful little cabinet with agate-inlaid drawers which stood at the bottom of the bed.   Each tiny drawer was a different jewel-like colour.  I didn’t dare touch it, and the rest of the party had moved on.

A huge, solid silver chandelier, the weight of which can only be imagined;  and another one made of Waterford crystal, which the cleaners apparently refuse to touch;  a portrait believed to be a likeness of Mary, Queen of Scots;   a Louis XIV marquetry cabinet designed by Boulle, originally for the Palace of Versailles;  paintings by Gainsborough, Reynolds, Holbein, Rembrandt…  the Buccleuch collection is world famous, and with good reason.  Dotted among these treasures are the more recent portraits, photographs and mementoes of the Scott family whose home this is, although the Duke’s main residence is Bowhill, in the Borders.

The heart of ‘The Bruce’

Throughout Drumlanrig, in the Buccleuch coat of arms and especially on the flag that flies from the castle, is the symbol of a red heart.  This can be traced back to James Douglas, who was a supporter of Robert the Bruce.

The Bruce left instructions that, after his death, his heart should be embalmed and taken to the Holy Lands on a crusade;  and in 1330 it was Douglas who carried king’s heart to Spain, where he bore it into battle against the Moors.  Douglas was killed during the siege of Teba, but both his body and the casket containing the embalmed heart were found on the battlefield and brought back to Scotland.   The heart of Robert the Bruce is now buried in Melrose Abbey.

It also interests me that the Scott crest bears a stag ‘trippant’ (posing, in other words!) and the motto ‘Amo‘, ‘I love’.

Drumlanrig Castle is built in the shape of a square, with towers at each corner (originally containing stairways to the upper floors) and a small courtyard in the middle.  Despite the large windows, some of the rooms have an air of darkness and mystery about them, particularly if they have oak-panelled walls.  In some of them, there was something deeply hypnotic about the silence, broken only by a clock ticking (or did I just imagine that?)  I was also fairly concerned about my handbag, as I had a horror of turning around and knocking something off.

All too soon, Ralph was leading us back down the narrow servants’ stairs into the kitchens, where we had started from.  And finally, I had the chance to find out something I was eager to know.  “Is it haunted?” I asked, and I knew straight away that it was.  Apparently, Drumlanrig has not just one, but five ghosts (well, one of them is more like a weird phenomenon).   Firstly, there’s a blood stain on a floor somewhere, which comes and goes;   then, there’s a lady who is (rather distressingly) headless;  there’s a phantom dog, resembling an Alsatian;   and a yellow monkey-like creature, which has been seen on the stairs.  Out of these, and not having seen any of them, I am not at all keen on the monkey.   And, wait, that only makes four!   But perhaps that’s quite enough…

In an interesting parallel to the fictional Downton Abbey, Drumlanrig was used as an auxiliary hospital during the First World War.  Between 1939 and 1945 the pupils of St Denis’ School in Edinburgh were re-located here.

On the morning of my visit, which was a Sunday, about 15 or 20 members of a sports car owners’ club had rolled up en masse and arranged their vehicles elegantly around the sweep of the front entrance while they presumably went for a coffee.

As time was rather short, I bypassed the delights of the tea room and stepped out into the courtyard which leads to the gardens.  Only a couple of other visitors came with me, and they soon disappeared into the woods (that sounds more suspicious than it probably was!)   I therefore had the gardens and grounds pretty much to myself.

There’s a well-tended walled garden and a long terrace with balustrading that seems to go on and on, almost deceiving the eye with the perspective;  and in the lawns below, a flower bed is planted with an intricate design, perfectly symmetrical, echoing the shape of the house.   All around, as far as the eye can see in every direction, is the Buccleuch estate, which extends to 90,000 acres.  Everything about this place is on an extraordinary scale.

Drumlanrig Castle is not really on the road to anywhere – you have to make a determined effort to visit it.  From the A76 at Thornhill, a B-road winds through woodlands and over the River Nith, and you must then turn off and follow an estate road through the castle grounds.  The Castle is open for guided tours in the summer months – more information on the official website.

Photos copyright © Jo Woolf;  images of the paintings via Wikimedia

Alexander II and the ‘ghosts’ of his galleys