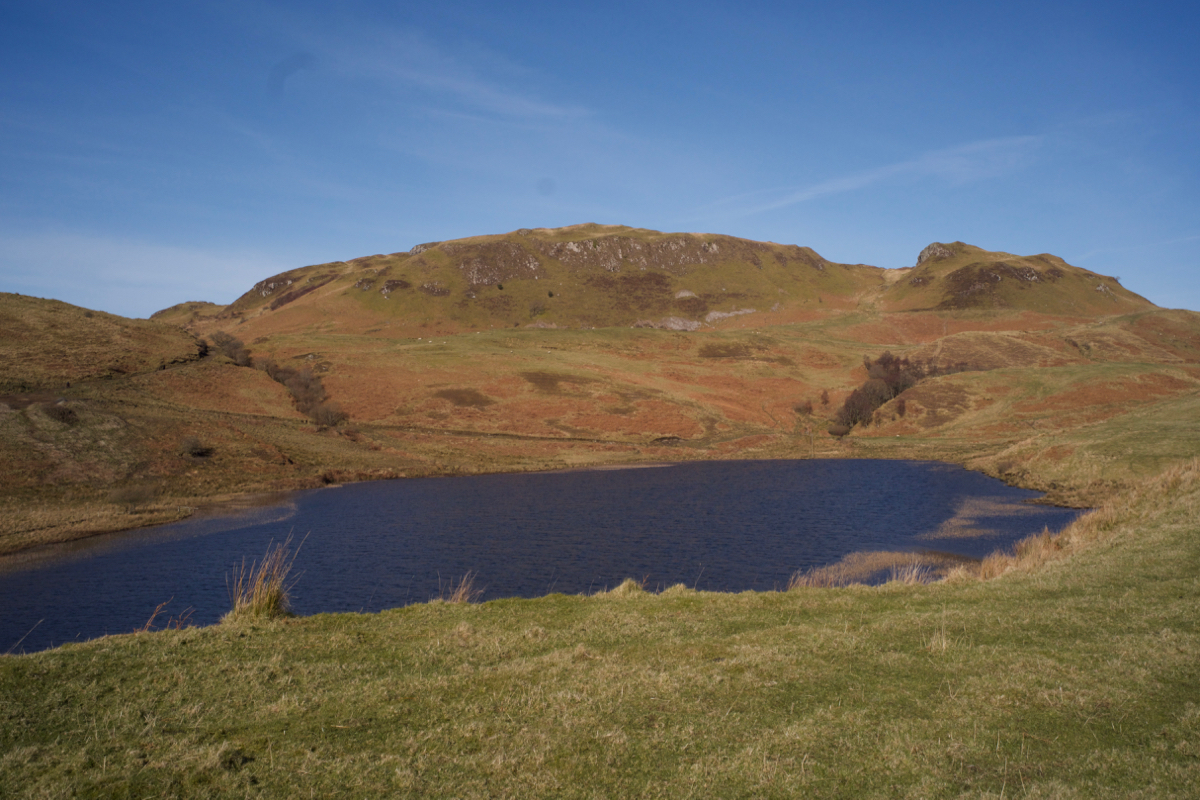 According to an old, half-forgotten tradition, there’s a stone shelf high on a hillside above Loch Seil called St Brendan’s Seat. Here, so it is said, the devout Irish missionary-saint used to sit and offer words of wisdom to his followers; at other times, perhaps, he simply gazed out at the rolling landscape of craggy hills and woods of birch and hazel.

The saint in question is St Brendan of Clonfert, also known as St Brendan the Navigator. Born in 484 AD in County Kerry, he is famous for having embarked on an ocean voyage in search of ‘the Isle of the Blessed’; he also travelled up and down the west coast of Scotland, and a number of places still bear his name.   In his book, ‘Netherlorn, Argyllshire and its Neighbourhood’ (1902), Patrick H Gillies* reveals that “…on a hill overlooking Clachan Sound, known as Suidhe Breanain (the seat of St Brendan), there are the remains of a churchyard called Claodh Breanain (the burial-ground of Brendan).”

While visible evidence of the burial ground has probably been lost, St Brendan’s Seat can still be found. This is easier said than done, because after all a stone seat, from a distance, could look like any one of a hundred rocky outcrops. But we felt it was worth a try, so on a bright morning in early March we walked past a couple of ruined cottages, over a stream which drains from a lochan known as the Dubh-loch, across a sheep field and diagonally up the side of Beinn Mhòr. 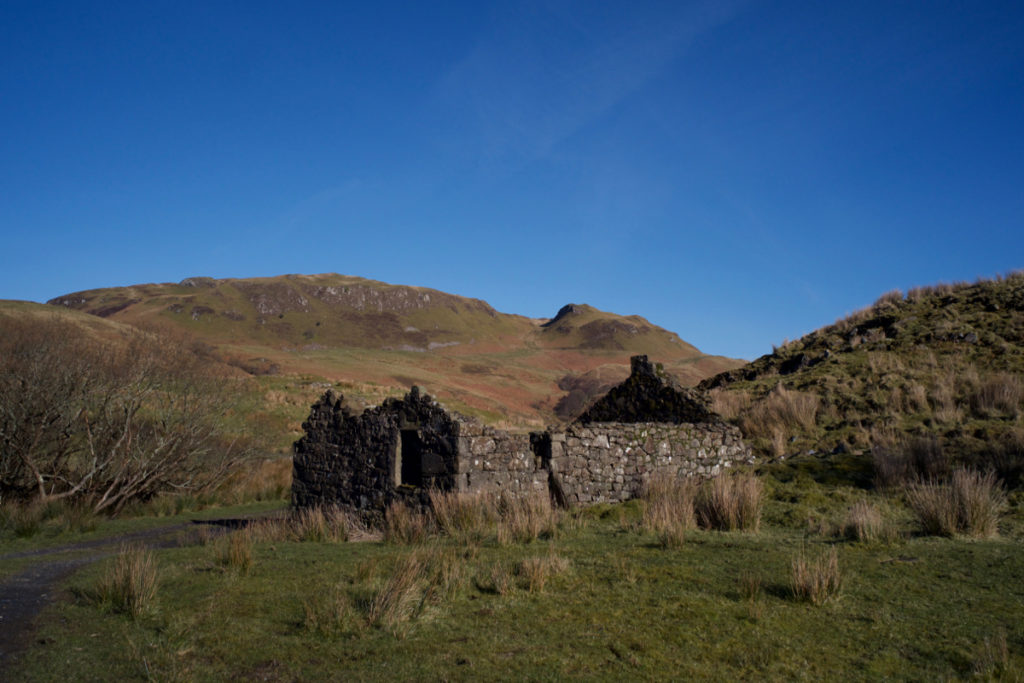 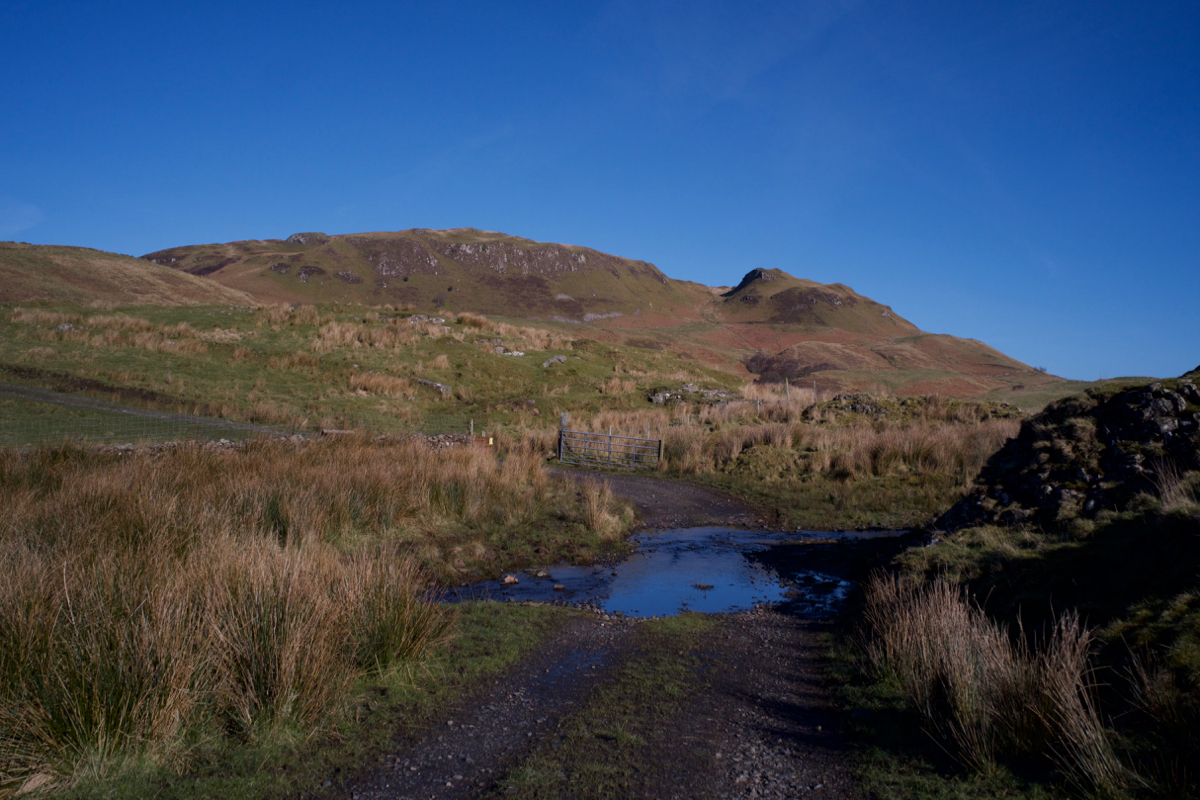 Having checked out a couple of outcrops, doubt began to creep in; were we even in the right place? But as we carried on up, the seat became visible quite suddenly, on a small patch of level ground.

There was no question that it was the right one: whether it’s natural or man-made, this is a proper seat! The smooth surfaces of large boulders form a substantial back and sides, and there’s even a flat, grassy cushion to sit on. We both tried it out, and found it very comfortable. When I sat down on it, I immediately had a text come through on my phone from my daughter, Verity; this convinced me that St Brendan must have gone there to get a good signal, because I’d had no reception at all until then. 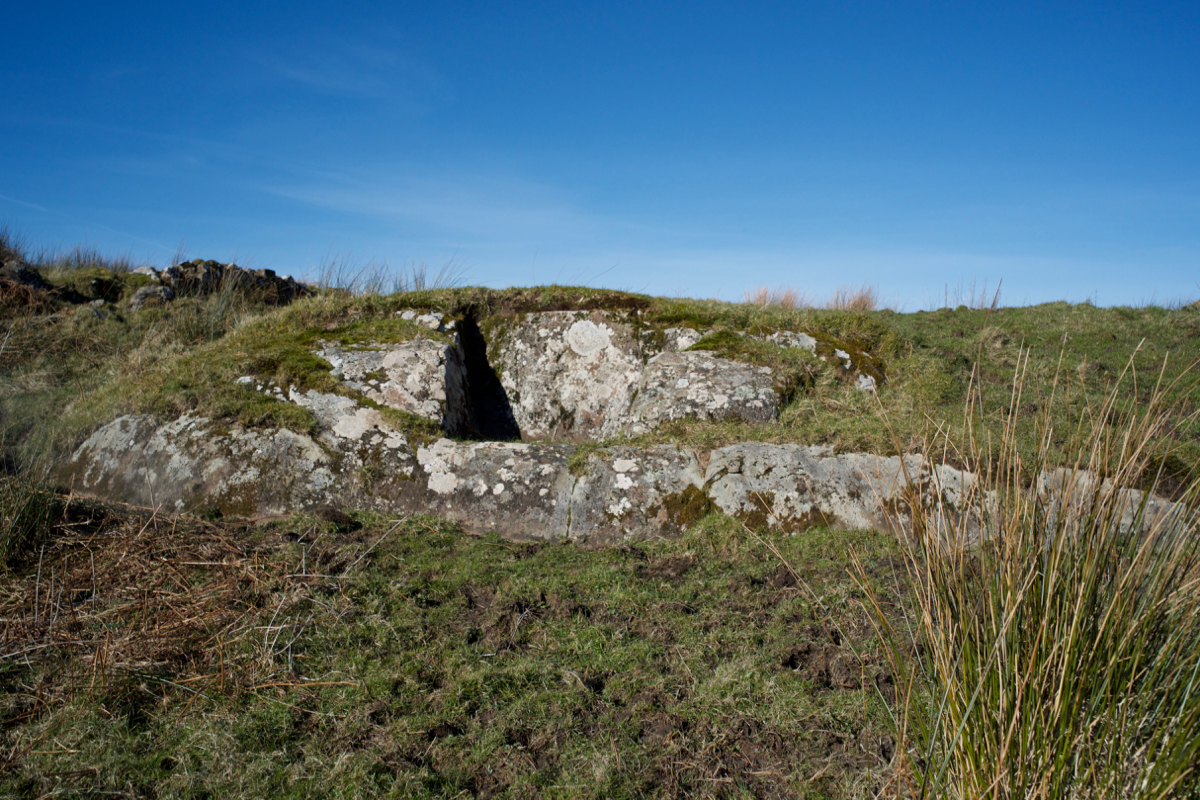 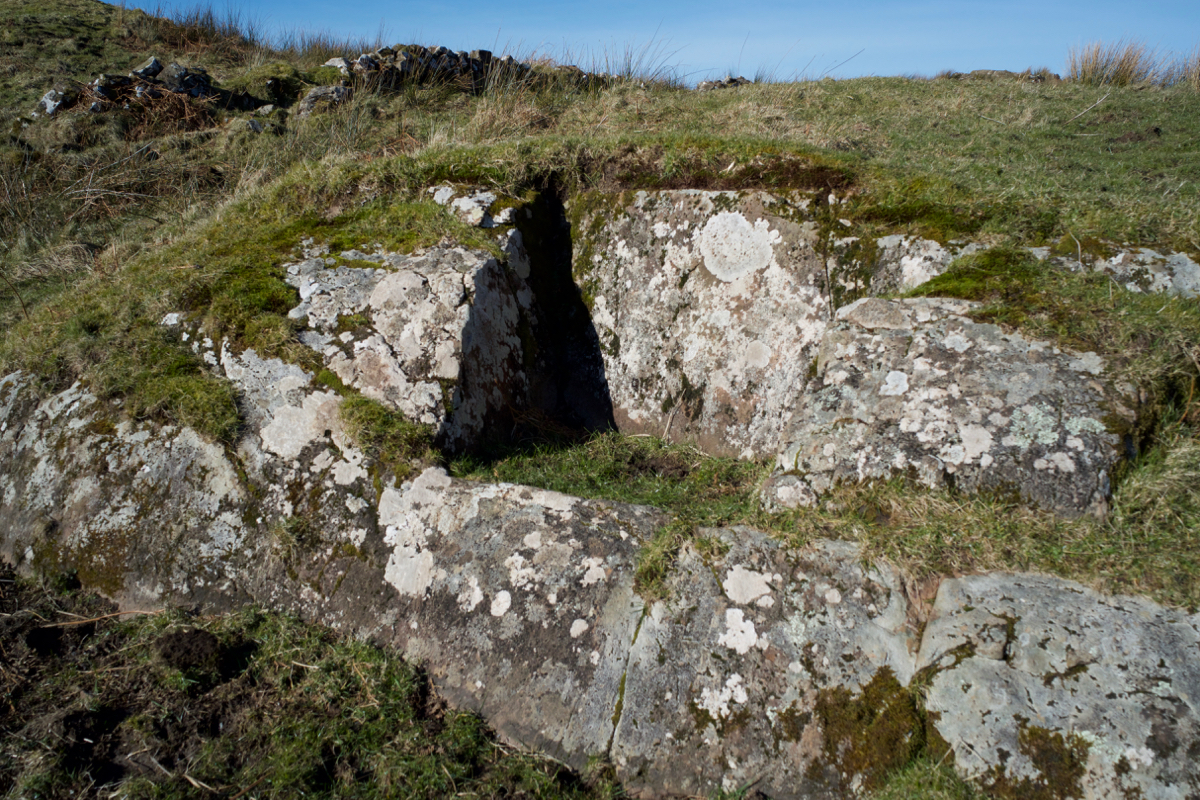 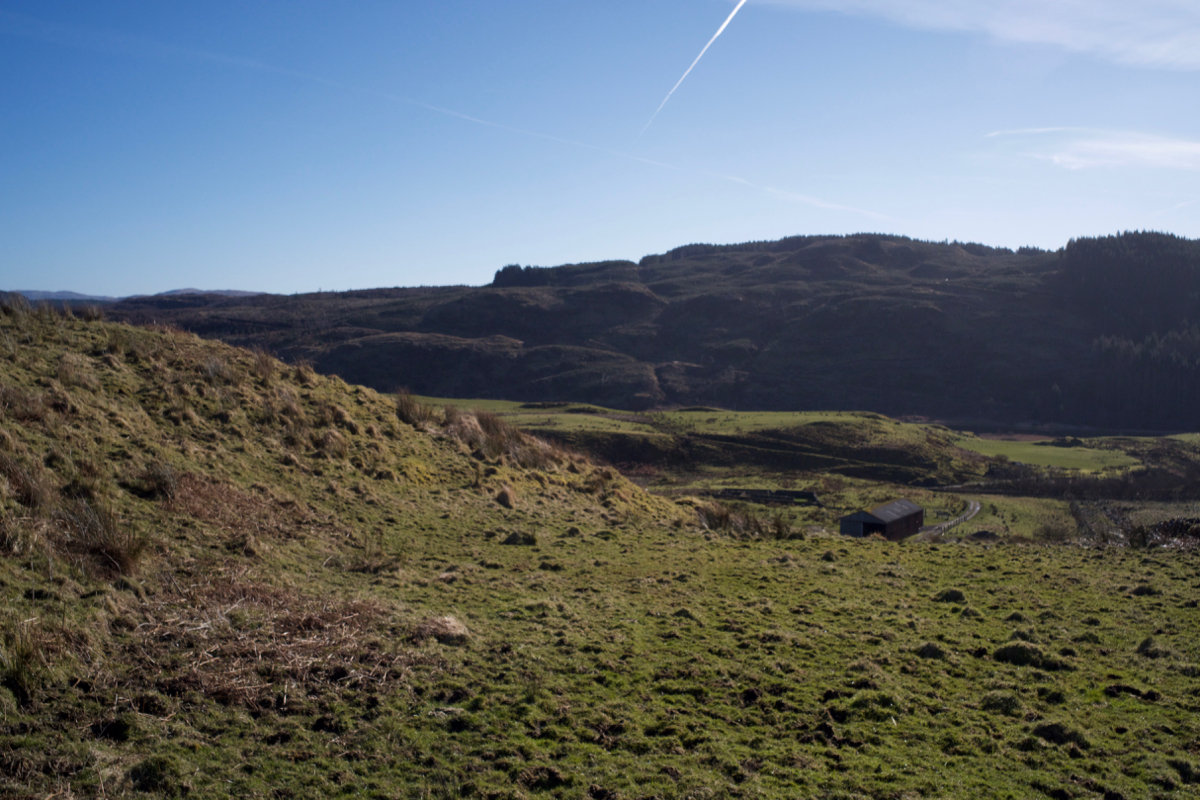 The view from the seat

Having admired St Brendan’s meditation spot we headed towards the eastern side of Beinn Mhòr, where there’s a gully between the main hill and a distinctive rocky promontory; above it, in the blue sky, some ravens were tumbling. As we made our way up, the enormous profile of a white-tailed eagle skimmed over the cliff like a low-level bomber and circled round us before joining his (or her) mate on a soaring sky-ride. 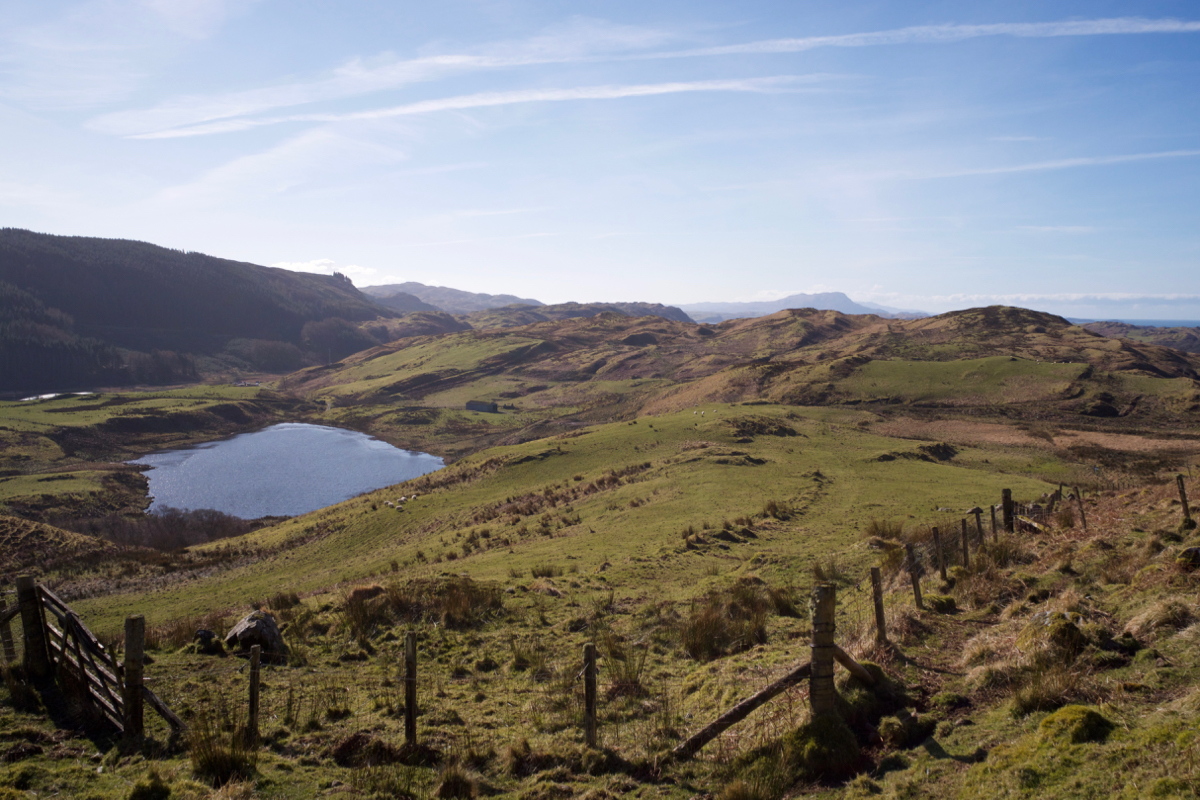 Looking down at the Dubh-loch

At the top, we soaked up the wonderful panorama for a few minutes, looking north-east to the twin snow-capped peaks of Cruachan, and west towards Mull and Morvern. In the foreground we could see the hill fort traditionally known as Losgann Lornach, or ‘the toad of Lorn’ because from the sea its profile is believed to resemble a toad’s head. (With a bit of imagination, you can also see it from the landward side.) 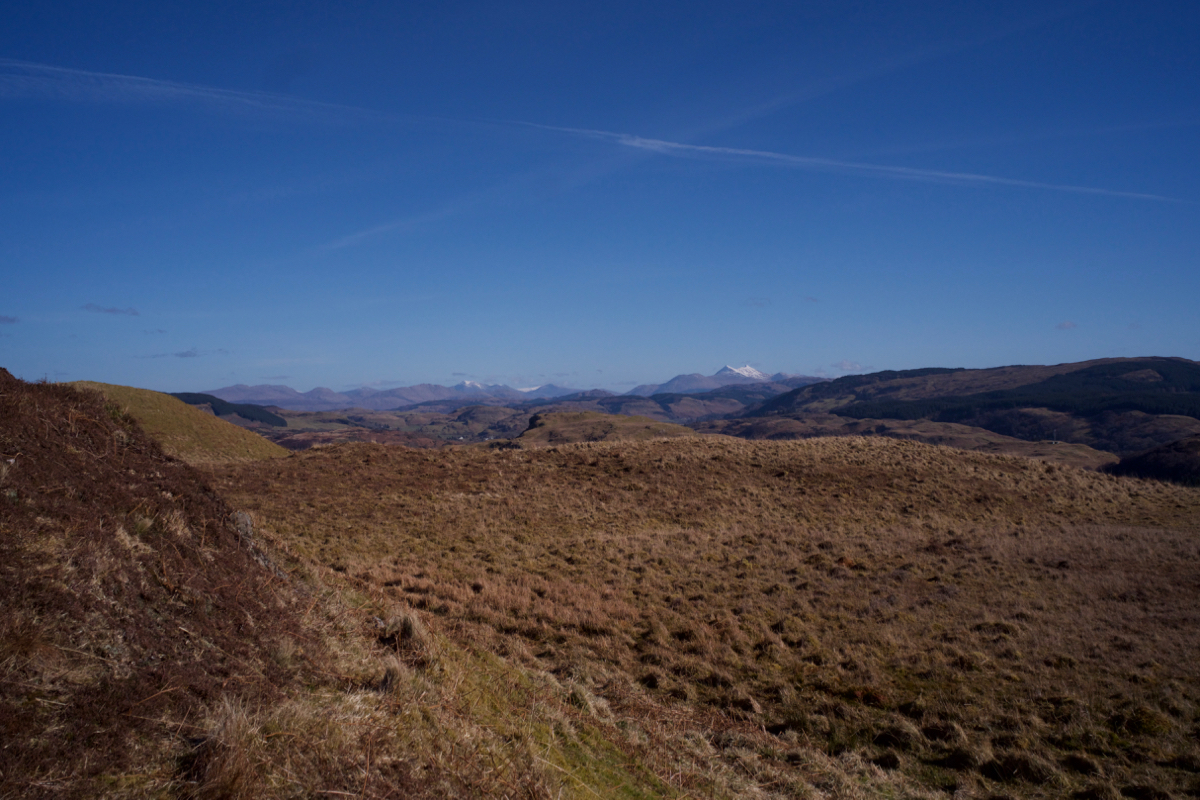 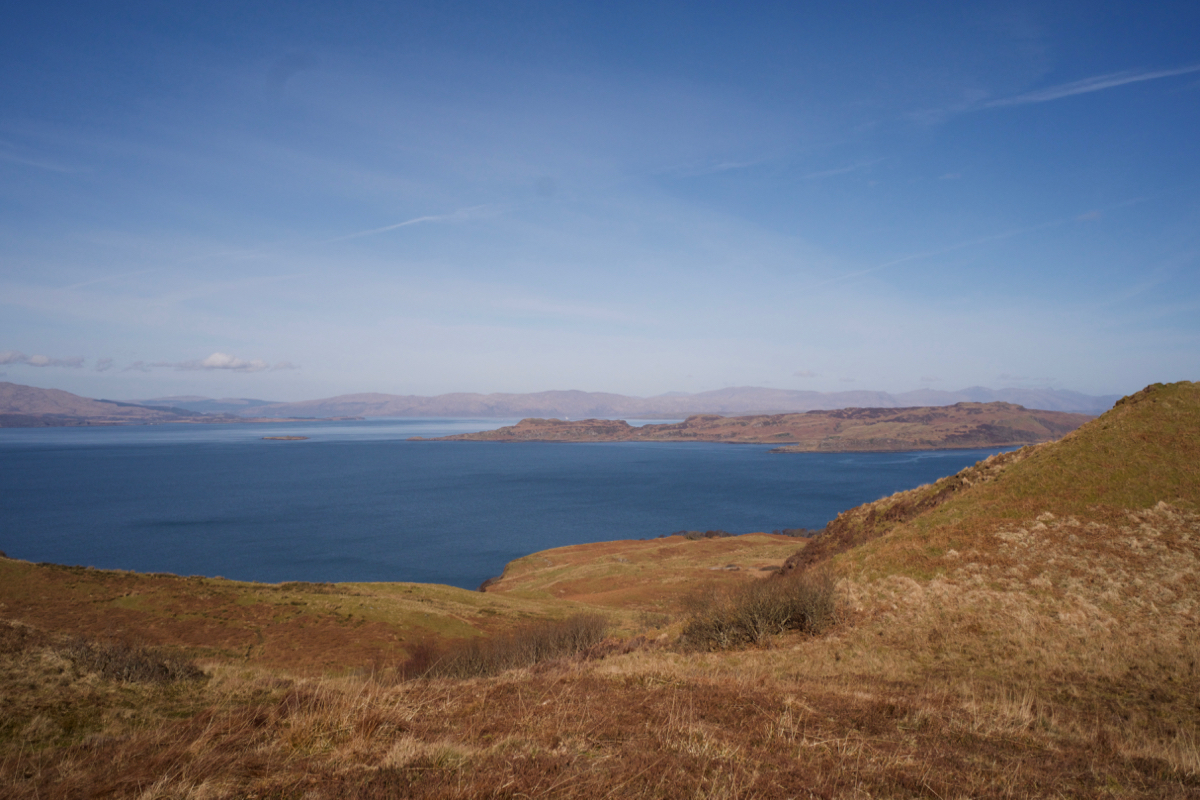 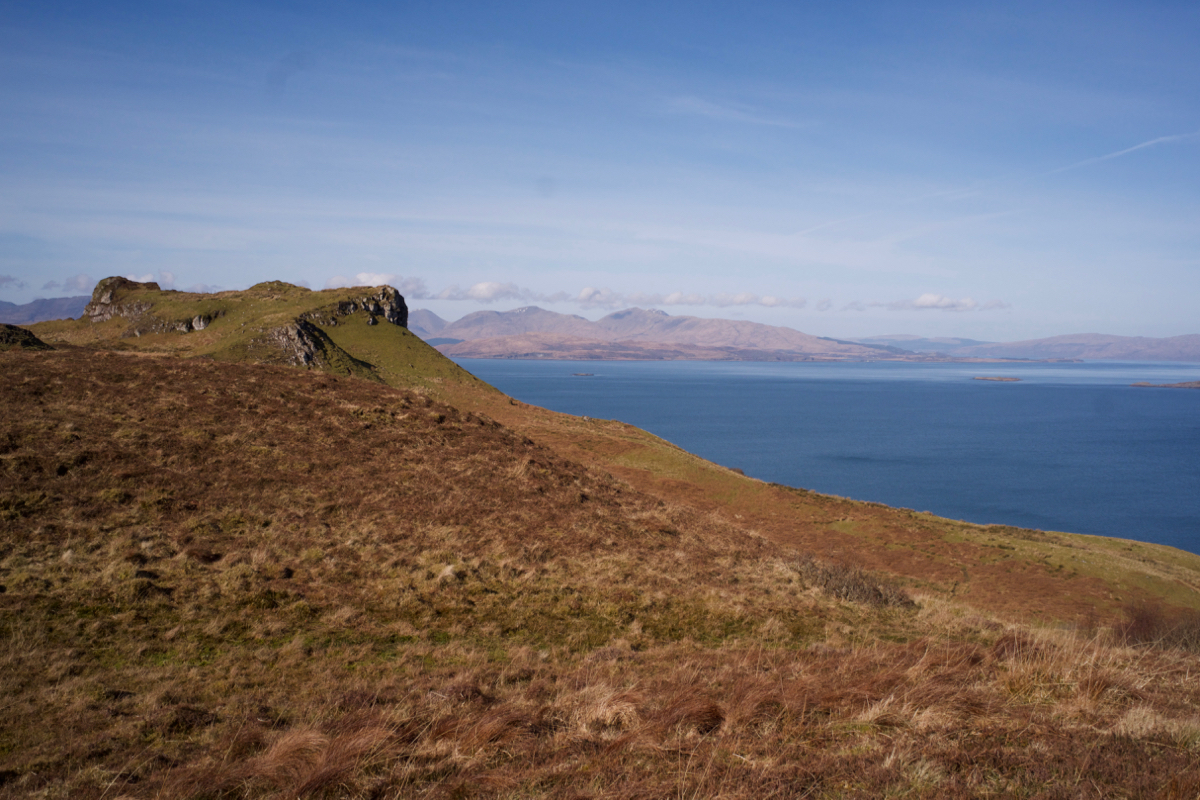 Losgann Lornach or the ‘Toad of Lorn’ (hill fort, on the left)

We followed the track back down and then splashed across the outflow from the Dubh-loch in order to go and look at some standing stones, which are situated in a field in full view of Beinn Mhòr and St Brendan’s Seat.

At one time there were at least four upright stones here, with three standing in a line and a fourth about 40 metres away. Now, only one remains standing. Its two fallen neighbours are partly engulfed in vegetation, while the outlier appears to have been snapped off at the base, leaving a fragment still lying on the surface. According to Canmore, all four were still standing in 1966, although the isolated stone was already reduced to a stump. 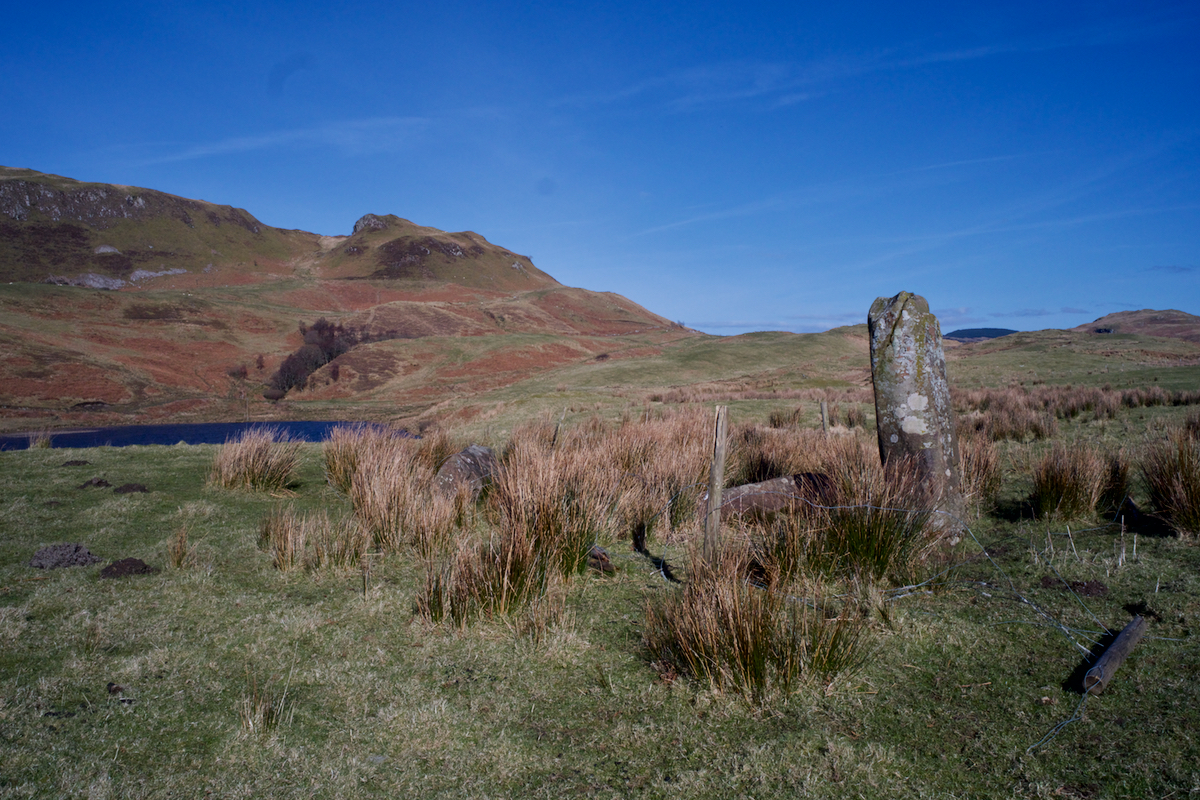 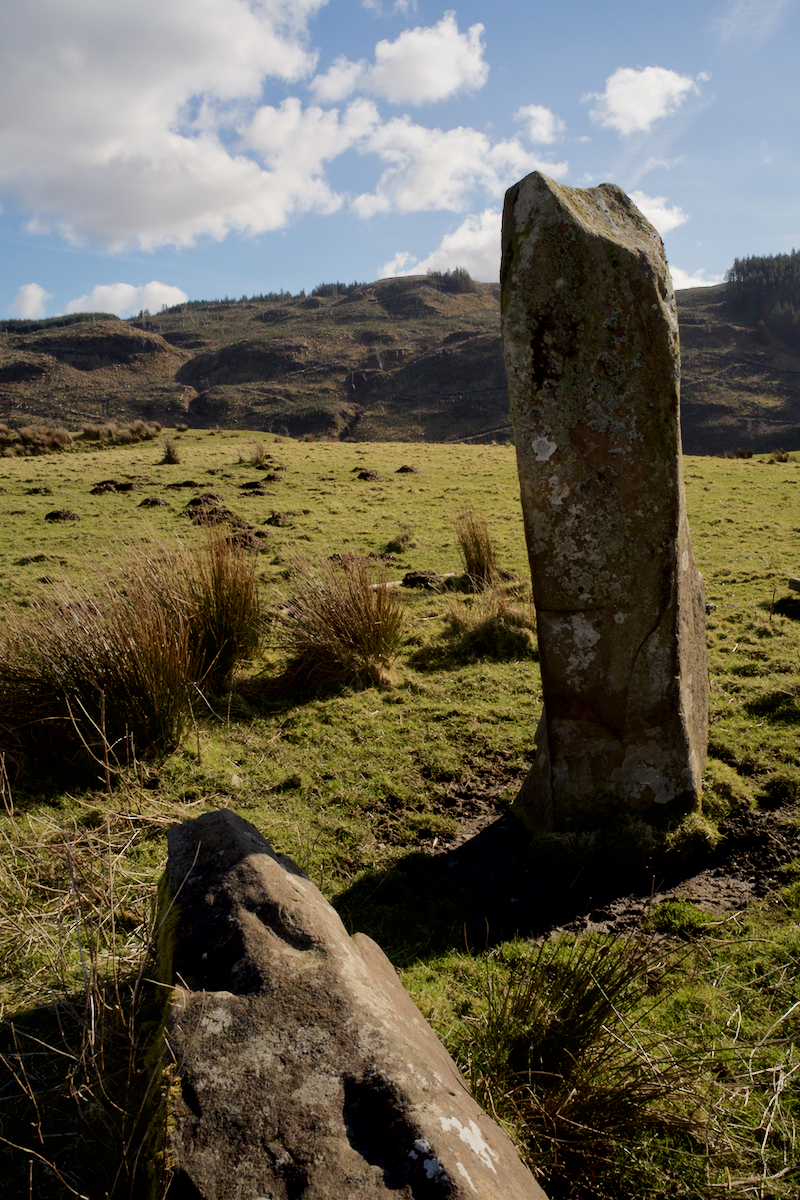 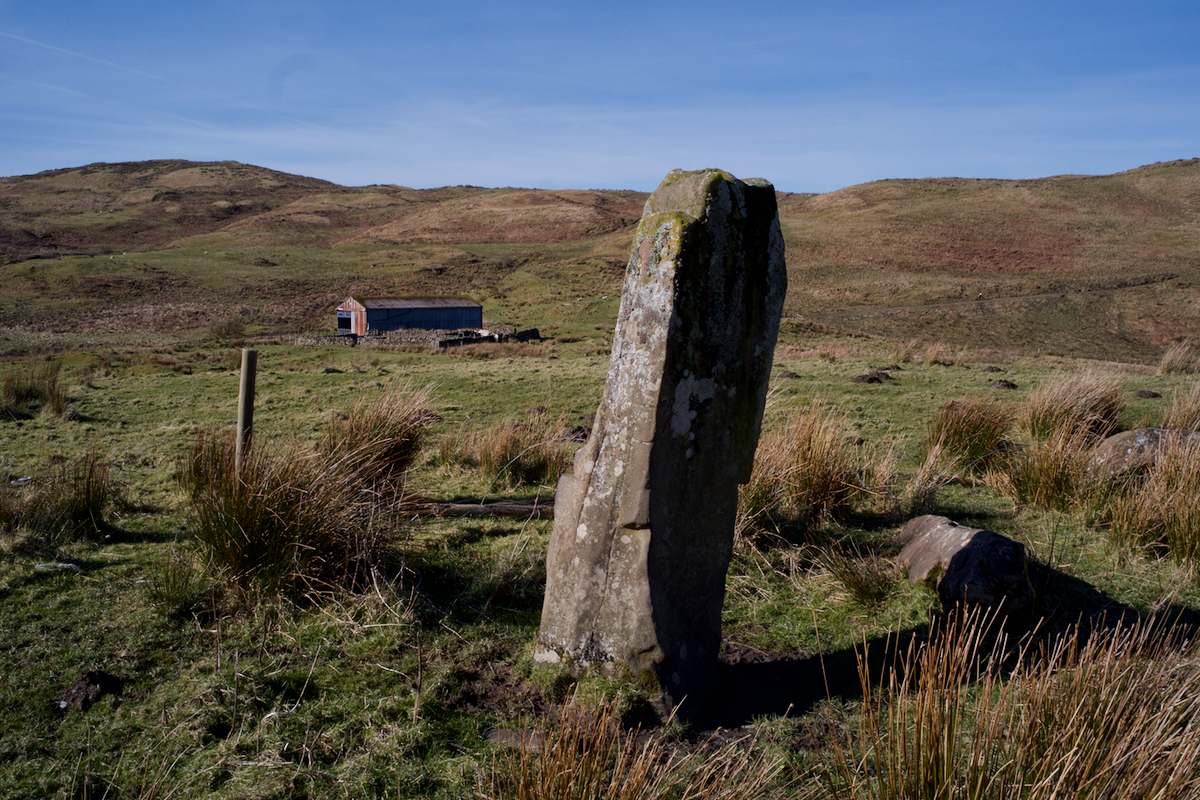 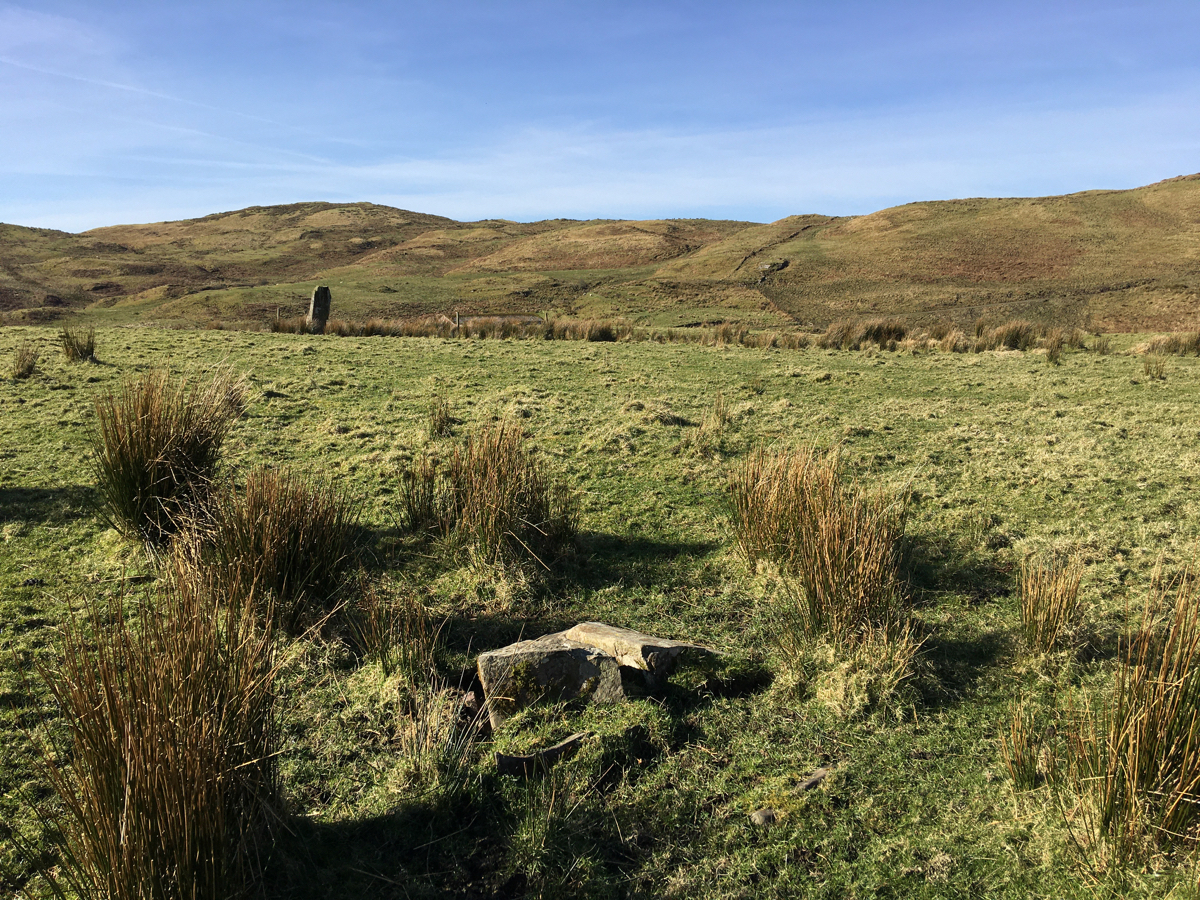 The place-name attached to the stones is Duachy, which means ‘meeting place’. It’s interesting to consider what went on here, and whether the seat, high up on the hillside, might have had some connection – because it could well have been ancient in St Brendan’s time. It would certainly have afforded an excellent – if rather distant – view of the stones, but maybe there was something more to see, such as a large gathering of people, or a sunrise alignment on a specific day of the year. I doubt we’ll ever know for sure.

Meanwhile, just to the south of the stones, a magnificent old elder tree was putting out its first leaves (elders seem to do this every year, and if they get nipped by the frost they just grow new ones). It had a distinct character, like the formidable old ‘elder mother’ that it is supposed to embody. A crow’s nest was lodged in its upper branches, and on the ground beneath was a scatter of dead wood. Colin photographed some particularly good examples of ‘Judas’s ear’ fungus, a fleshy-looking growth which seems to flourish on elder trees. 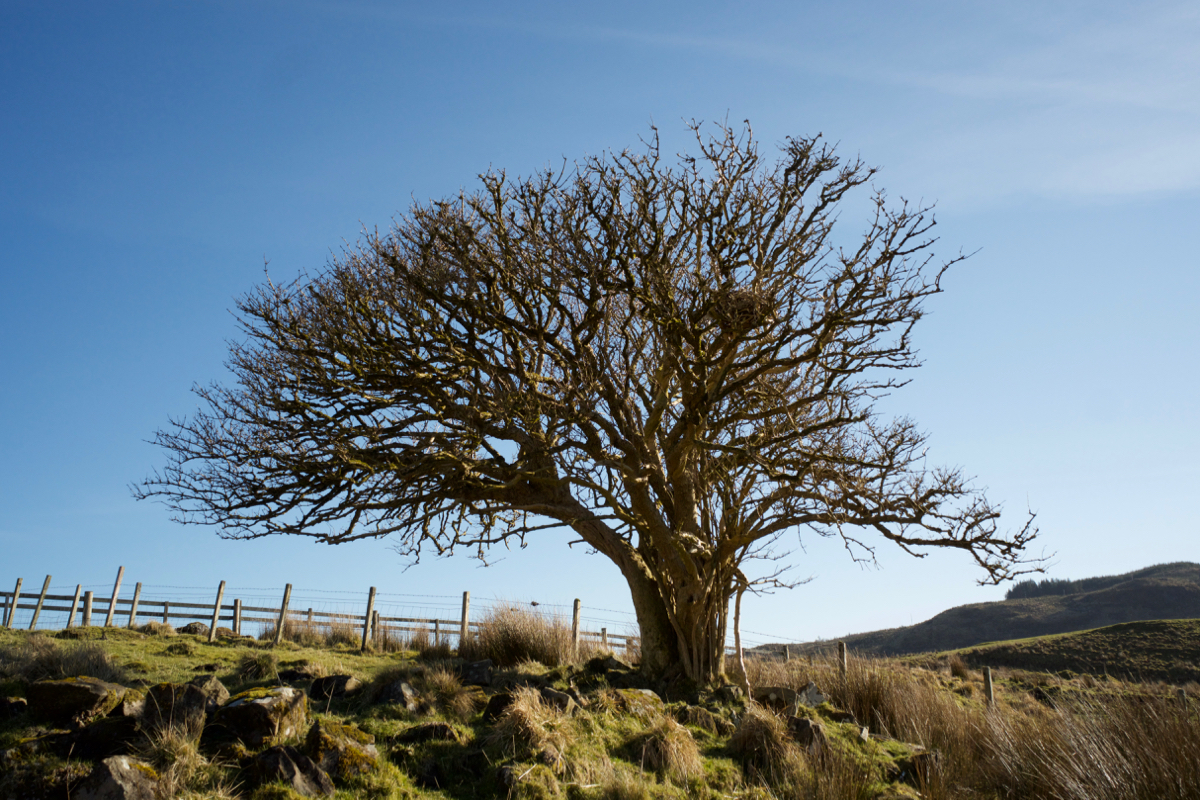 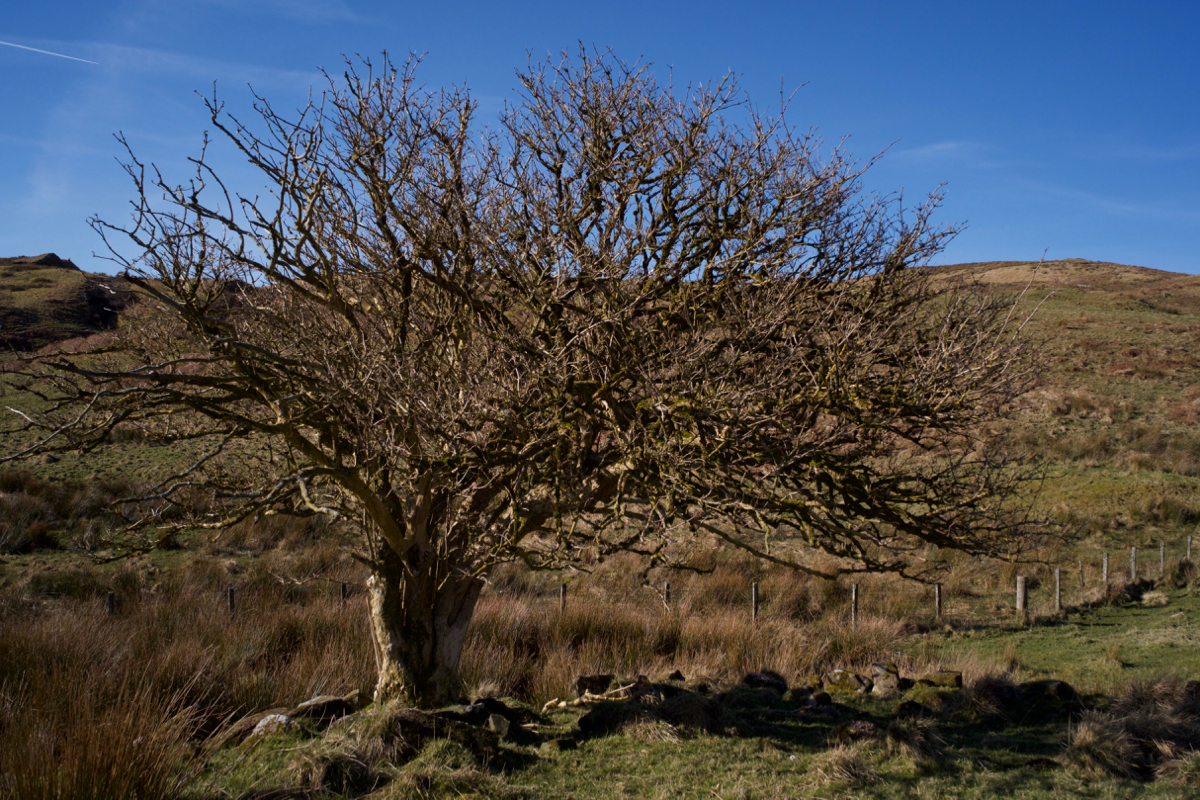 A guardian of the stones? Perhaps… we’ve noticed elder trees in similar situations before, notably Greadal Fhinn, a Neolithic chambered cairn in Ardnamurchan, and Temple Wood in Kilmartin Glen. To me, this tree seemed to have more presence than the stones that lie broken in the next field. It had even shed some branches that would make good Gandalf-style staffs, but I left them well alone!

*Patrick H Gillies was a doctor who lived on Easdale Island, not far from here.

Other places connected with St Brendan include Eileach an Naoimh in the Garvellachs.   We’ve also encountered another saintly chair, said to have been occupied by St Moluag on the Isle of Lismore. 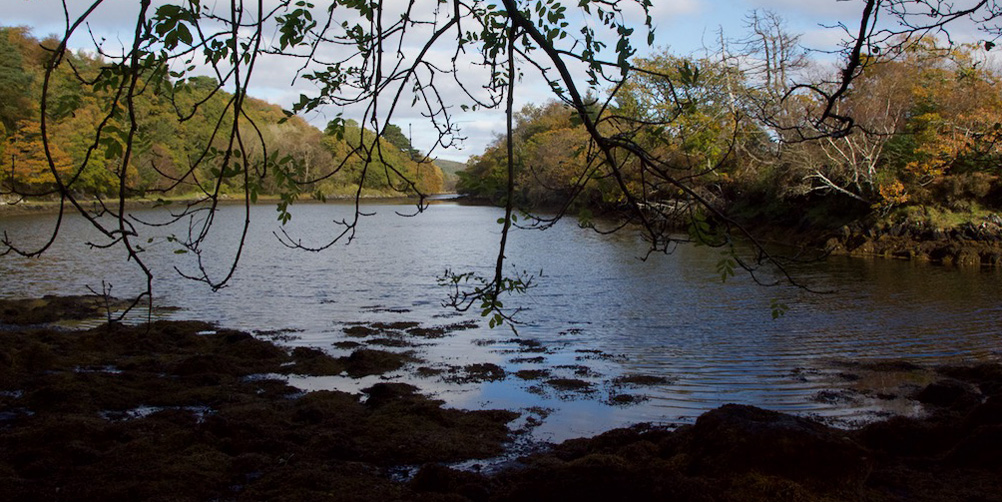 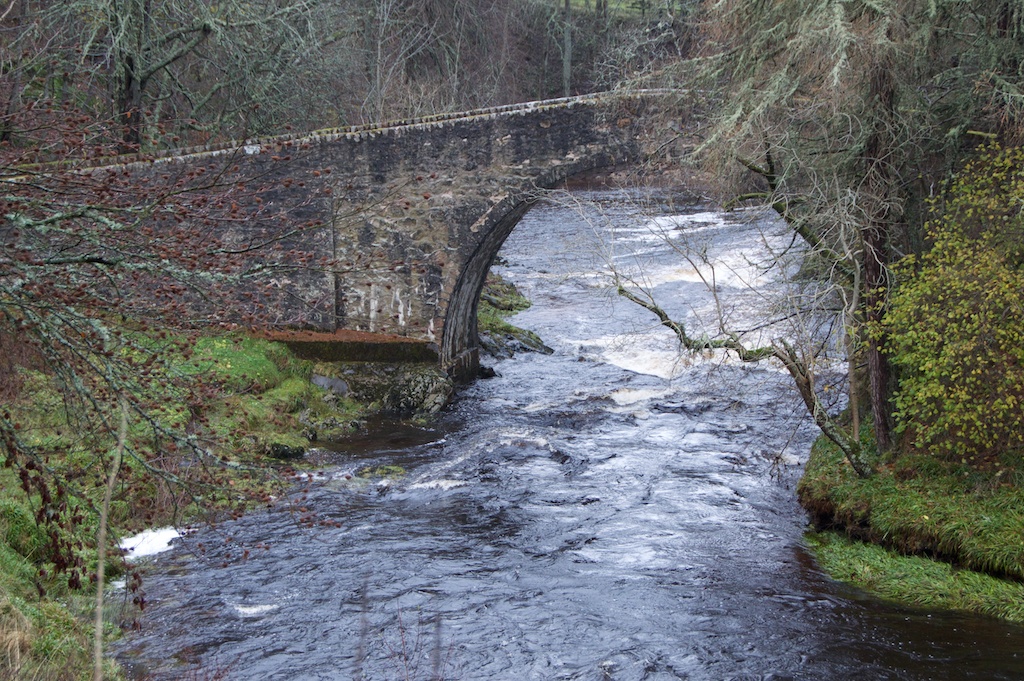 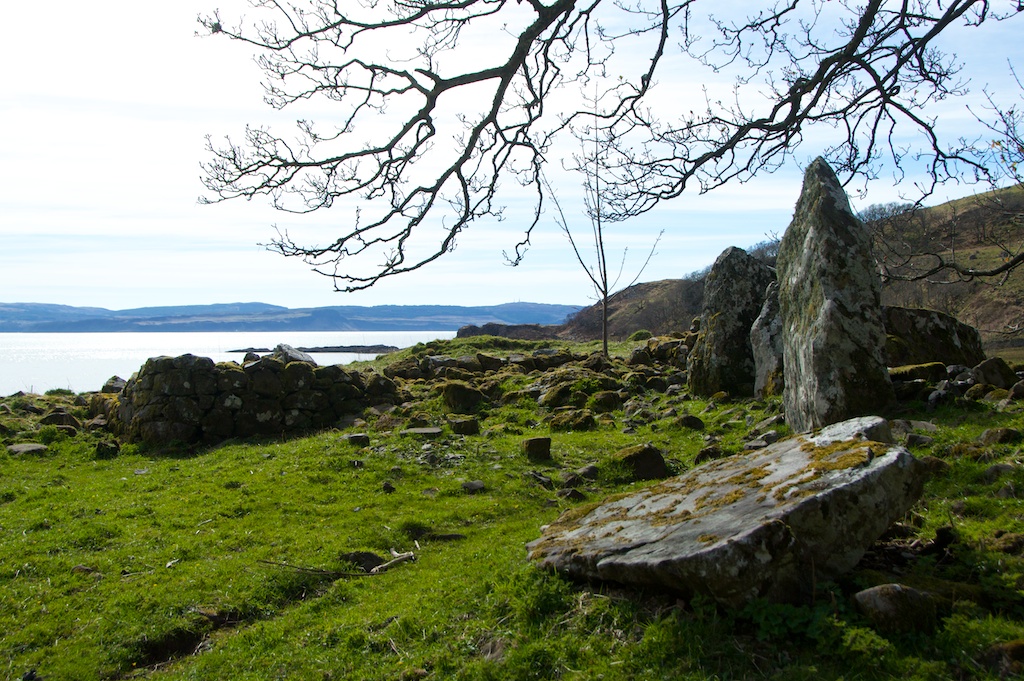 Camas nan Geall: ‘the Bay of the Strangers’