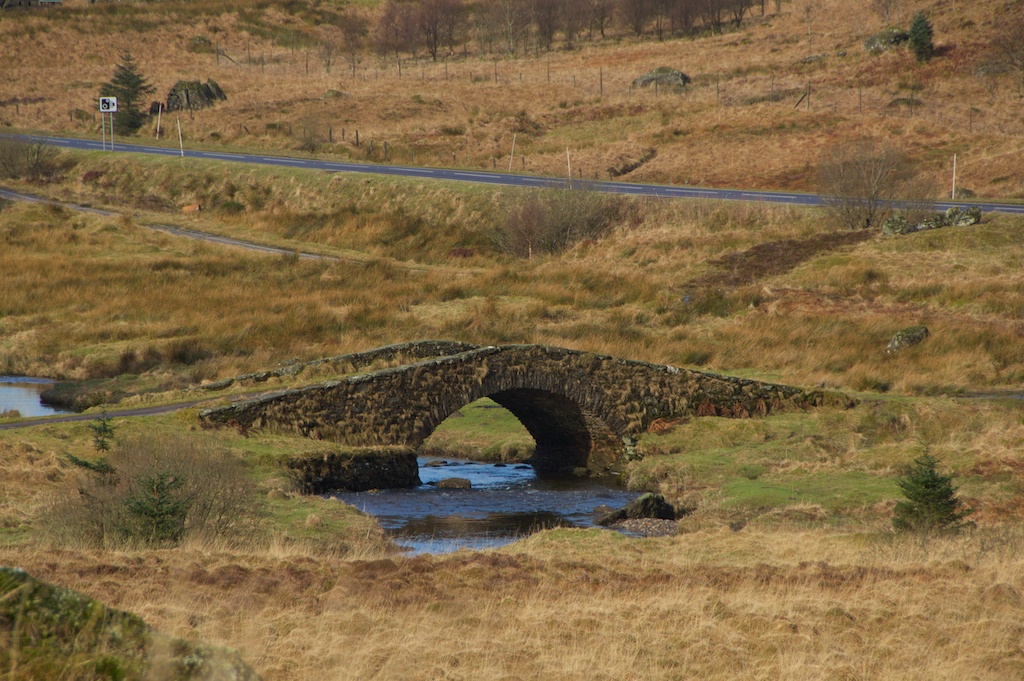 From Arrochar on Loch Long, the A83 rises steeply up Glen Croe towards the vantage point known as Rest and Be Thankful.  Just beyond the crest, it skirts Loch Restil and then drops at a gentler pace down towards Glen Kinglas.

As it sweeps in a wide curve round to the left, it’s possible to see a little bridge spanning the burn that runs through the glen.  The Royal Commission on the Ancient and Historical Monuments of Scotland says:

“This is a fine old bridge carrying the old road across the Kinglas Water at Butterbridge.  A handsome single segmental arch… rubble built.  Now used as a footbridge only.”

The bridge was built by General Caulfield in 1745, and it originally carried a military road into the heart of the Highlands;  the whole road-making programme was designed by the English government to subdue the recalcitrant Scots after the first Jacobite uprising, but judging by the date (1745 marked the return of Bonnie Prince Charlie to Glen Shiel) the success of this scheme was debatable.

You can see the path of the old road running parallel to the newer one just above it.

But… Butter Bridge?   How did that name come about?   One story says that there was always a crossing here, from the time when the cattle were herded up into the higher ground for the summer months.   Women would go with them and set up temporary dwellings in this tranquil spot, churning the milk to make butter and cheese.   Although I can’t find any mention of it, there may well have been an older crossing of the river at this point.

And then, I read that a hermit once lived here, and was quite well known in the district.  How exciting!  I started to imagine an early Christian monk – like St Columba on Iona, or St Brendan in the Garvellachs.  But no.  This hermit lived a bit more recently:  the 1950s, in fact.   Also known as the ‘fairy man’, he was a forestry worker named Alex (‘Sandy’) Drummond, originally from Fernoch near Taynuilt, who left his employer after a disagreement and settled down for a solitary life in Glen Kinglas.  Taynuilt is a good 50 or so miles away, even as the crow flies.

What happened to him, and did anyone actually meet him?   In 2012, an appeal for information by the news website forargyll.com resulted in several responses from readers, some of whom had taken photos of Drummond and remembered him and his hut.   At one time he was a bit of a visitor attraction, although he doesn’t seem to have minded.  One reader recalls him clambering on board the MacBrayne’s bus, which had stopped so that passengers could photograph him, and having a sing-a-long. When the new road was put through the glen, by-passing the old bridge, Drummond was employed in road-building.  He died at a nursing home in Dunoon.

I can still see shades of St Columba.  Because, when you think about it, Columba was forced to leave his home after a falling out with his superior, St Finian.  Admittedly, this escalated into a full-blown battle… but, like Sandy Drummond, he ended up in exile, living a simple and reclusive existence.   It doesn’t feel as if the two stories have 1,400 years between them.

And what a place to live!   I hope Drummond was happy here.  How good it would have been, to talk to him and hear the stories he had to tell. 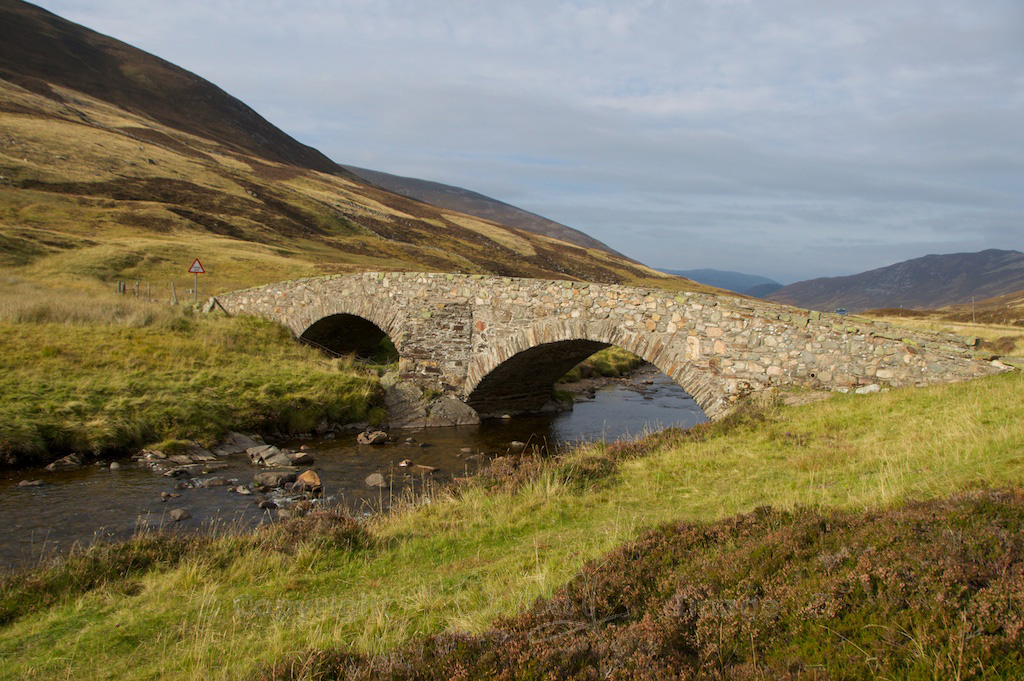 For more military bridges of the 18th century, take a look at Fraser’s Bridge in Glen Cluny (right), and another little bridge in the Sma’ Glen, Perthshire. 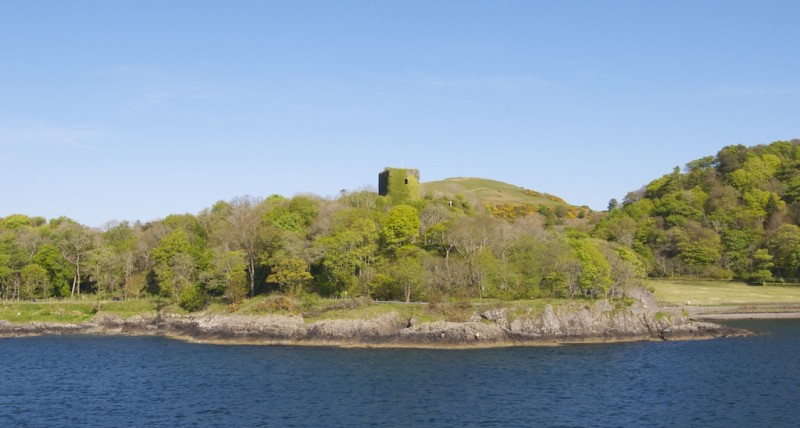 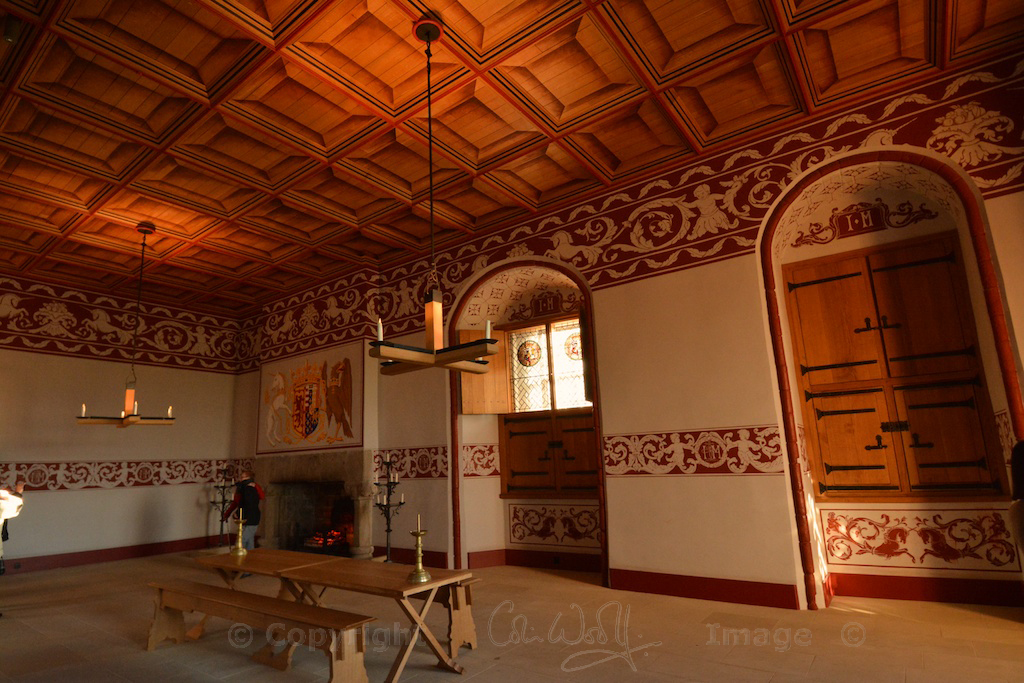